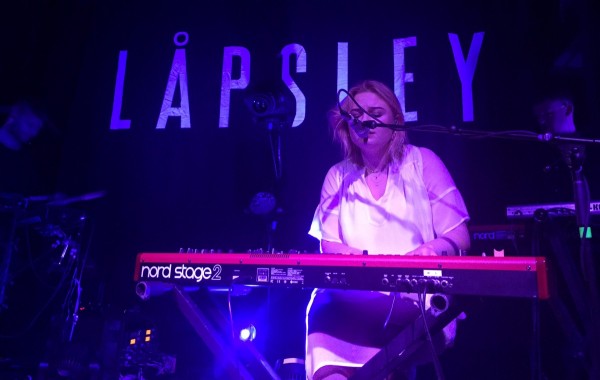 Near the very end of 2014, I came across a single called “Falling Short” by a young British artist named Holly Lapsley Fletcher (stylized as Låpsley), and was immediately hooked. It is a hauntingly beautiful track set apart by her exquisite vocals paired with minimalistic piano and electronic melodies, further enhancing the effect of the concept of falling short to which all of us can relate. Up to that point, Låpsley had only released a 4-song, home-recorded EP titled Monday, along with the aforementioned single, yet it was enough to earn her a nomination for the BBC’s Sound of 2015 list of the best new talent in music. She has since signed with a label and released her second EP, Understudy, plus a couple other singles, and has started slowly but surely coming over to the U.S. to showcase her talent.

Having regrettably missed the opportunity to see Låpsley’s American debut when she played Baby’s All Right back in May, I was determined to not let it happen again, so I was happily in the sold-out audience for her second trip back to NYC last Monday when she played at Rough Trade. Unsurprisingly, her performance was phenomenal, as she captivated the audience with her powerful voice (which has characteristics similar to Adele when hearing it live). There wasn’t much of a cohesive flow to the 19-year old’s set, and while this is to most shows’ detriment, it proved to be the exact opposite for Låpsley, where each song had the gravity to be a show on its own.

Låpsley’s set started off by seamlessly combining “8896” and “Cliff” before allowing the crowd to show our enjoyment and appreciation for her performance. From that point forward, every song seemed to be more impressive than the next, with the romantic “Burn” (which one audience member commented could be a wedding song), the R.E.M. reference-filled “Painter,” and of course, “Falling Short,” which absolutely leveled the Rough Trade faithful. Låpsley even snuck in a slowed-down cover of The Weeknd’s “The Hills,” which she performed with aplomb. Near the end of the show, we were treated to some of her voice distortion, which you can hear in several of her songs, during “Station,” making use of two separate microphones at the same time. This got a rise out of the crowd, just in time to cap off the evening with her most poppy, upbeat tune (and newest single), “Hurt Me.”

Låpsley seemed to have just as much fun performing her music for us as we did experiencing it, and it was easily one of the best sets that I’ve seen this year. She is certainly a star on the rise, and it would not shock me one bit to see her popularity skyrocket during 2016. There is nothing in the news as of yet about a debut LP on the horizon for Låpsley, but in speaking to a label rep at the merch table after the show, he did give the impression that something was coming next year, though he could clearly not confirm anything at this point. Either way, if this show and her already released material is any indication, we should expect a lot of amazing things from her in the months to come.