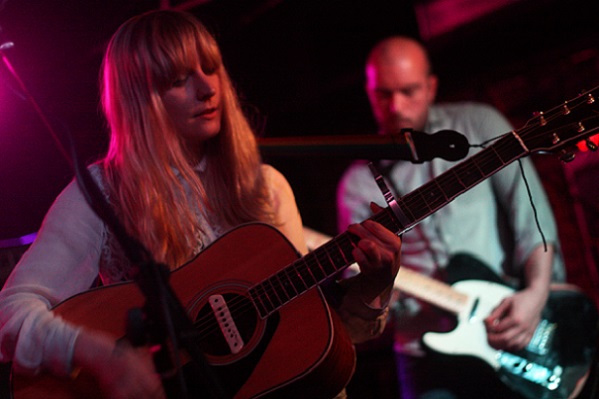 It is always a blast to welcome an international band to the American music scene. Last Thursday at Mercury Lounge, British indie rock group Lanterns on the Lake played their very first live show in New York City, just in time to support their sophomore LP, Until the Colours Run.

Austin, TX native Jesse Woods delivered a strong set of southern folk rock to start things off. Woods’ Texan style was audibly and lyrically evident as he showcased a collection of songs from his latest full-length, Get Your Burdens Lifted. Some of the standout tracks for me were “Broken Bottle” and “Danger in the Dancehall”. His bassist and drummer were also able to enjoy themselves as well, bringing some subtle physical goofiness in the way they played without upstaging Woods in the slightest.

Whether serene melodies, or pounding medleys, Newcastle’s Lanterns on the Lake create a mini-orchestral atmosphere. Their array of instruments is slightly wider than that of the average band. The live culmination turned out to be mesmerizing. From song to song, their instrumental ingredients cooked together and boiled over to create beautiful soundscapes. Each member of the five-piece played an integral role in the live performance.

On the newer tunes like “The Buffalo Days” and “The Ghost That Sleeps In Me”, Hazel Wilde’s lead vocals had a ghostly way of creeping up on you and crawling away. She spent the most time on keyboard as well, rotating with bassist Andrew Scrogham and drummer Oliver Ketteringham. Wilde would switch it up and play some acoustic guitar as well. Paul Gregory brought a great deal of energy to the stage. His electric guitar work was supplemented by intermittent and frantic bowing. On violin, Sarah Kemp provided a classical backbone to the instrumental melting pot. Rather than worrying about a stereotypical encore, Wilde treated us to a solo performance of “Green and Gold” before the full band closed their set with “Until the Colours Run”, and “I’m With You, Sleepyhead.”

Lanterns on the Lake

Setlist- Lanterns on the Lake
Picture Show
Elodie
A Kingdom
Ships in the Rain
Another Tale from Another English Town
The Ghost That Sleeps in Me
The Buffalo Days
Sapsorrow
Tricks
Not Going Back to the Harbour
Green and Gold
Until the Colours Run
I’m With You, Sleepyhead