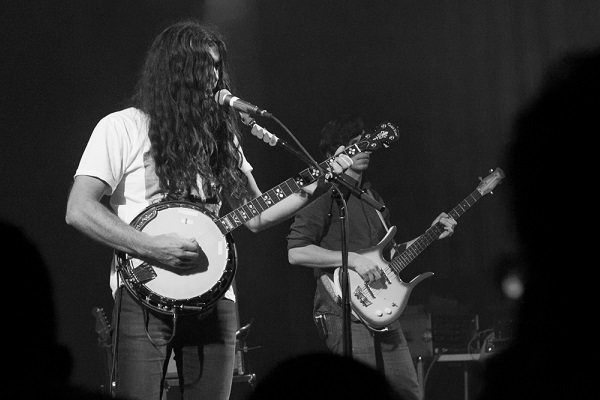 On February 17th, a Wednesday night, I attended my first show at College Street Music Hall – Kurt Vile and the Violators. College Street replaces the Palace Performing Arts Center, which went unused from 2002 until its renovation by Premier Concerts in 2015. The new Music Hall has already hosted bands like Modest Mouse and Wilco, and is poised to continue attracting major acts looking for a capacious, friendly space. The Hall caps out at roughly 2000 bodies in general admission, and can be reconfigured to permit seating. It was GA for this show – the floor descends in roomy, theater-like tiers that allow for easy viewing angles.

Opening for Kurt Vile on multiple tour stops, Xylouris White is a cultural goldmine forged from the surnames of George Xylouris and Jim White. Xylouris hails from Crete (his uncle is the distinguished Nikos Xylouris, a folk icon), while Jim White emerged from the Australian post-punk scene. In 2014 they released a full length LP on Other Music, Goats, produced by Fugazi’s Guy Piccotto. The two look incredibly distinctive onstage, both sporting wildly curly beards and looking nearly conjoined with their instruments. White’s interaction with his drum kit is a glorious performance to behold, and the crowd at College Street was hugely into it. Xylouris White was an excellent and perhaps atypical way to start the night.

The Violators took up their positions and warmed up their amps. Kurt Vile strolled onto the stage, his face obscured by a thick mop of hair and a half-empty bottle of wine in his hand. He toasted the crowd before trading the bottle for a guitar. For most of the show he would either be playing or drinking, slightly resembling a happy stoner octopus and engaging in banter only once or twice. He tore willy-nilly into the first three songs off his new record, b’lieve i’m goin’ down (2015, Matador), before rewinding to 2011’s “Jesus Fever”.

Vile is a Pennsylvanian who started off his musical career on the banjo. He honed his skills while holding different blue-collar jobs, including a stint as a forklift driver. He found himself increasingly depressed and dissatisfied with this existence, and in 2003 formed The War on Drugs with Adam Granduciel. He left in 2008 to pursue his solo career and has been enjoying commercial and critical success ever since. b’lieve i’m goin’ down charted at #40 on the Billboard 200 and holds an 8.4 on Pitchfork.

Although not the most engaging performance I’ve witnessed, I thought that Kurt Vile’s loopy and slightly vague stage presence was complimented by Xylouris White’s lucidity. It was also a great way to be introduced to College Street – the show was well attended, the music sounded great, the floors were cleaner than Toad’s and the staff was friendly. What more can you ask for?

Kurt Vile and the Violators