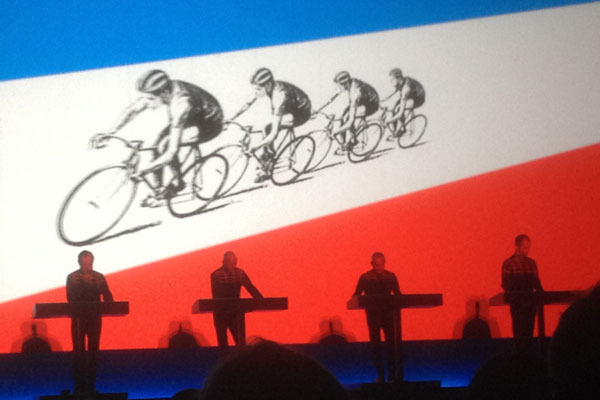 In a day and age of ever-increasing technology, all aspects of everyday living (yes, even concerts) have been affected both negatively and positively. We are unfortunately all too familiar with the sea of smartphones and tablets that plague the live experience. Whether you are the one holding such a device or simply the one whose vision is blocked by these inconveniences, we’ve grown conditioned to watching the screen at the live experience.

But what if I told you that there was a such show where watching a screen didn’t hinder the experience, it was the experience? It’s not some kind of joke, even though it took place on April Fool’s Day.

It was exactly two years ago today that I had the great opportunity to watch Kraftwerk perform the first night of their “Retrospective 1 2 3 4 5 6 7 8” series at the MoMA. They covered Autobahn in its entirety, an album that paved the way for every electronic-infused artist today. Start rattling off names…everything from Air to Zed’s Dead has the group’s out-of-the-box experimenting with music and electronics to thank. Fun fact: Autobahn turns 40 this year!

Since the coming and going of those shows, Kraftwerk has toured expansively around the world with a similar show set-up as the MoMA performances and even doing the occasional headlining festival gig. (i.e. Ultra Festival, T in the Park) The tour brought them back to New York for two nights at the majestic United Palace Theater. What set this apart from the MoMA performances, besides the approximately 3,000+ more people in attendance, was that the show didn’t follow any particular album: all hits were on the table and the unexpected was to be expected.

“The Robots” kicked off to a mostly empty theater. Many fans hadn’t made it to their seats yet because of the lengthy lines to get into the venue (or many spent their precious time getting all the way uptown) and to pick up the 3D glasses needed to enjoy the group’s visuals. By the time the following song came on, most had rushed to their seats.

The group, comprised of one founding member and three others who continue to carry the legacy, stood stoic and mostly statuesque. Other than an occasional case of toe-tapping and a subtle stretch, the individuals almost seemed as artificial and robotic as the subject matter for much of their material. The visuals, presented all in 3D, never ventured far from the theme of the era, track or album…but as a fan of electronic music, history or Kraftwerk, that is what made them so wonderful. Right before your eyes (and ears), you watched (and listened) to the revolution of the great-grandfathers of electronic music.