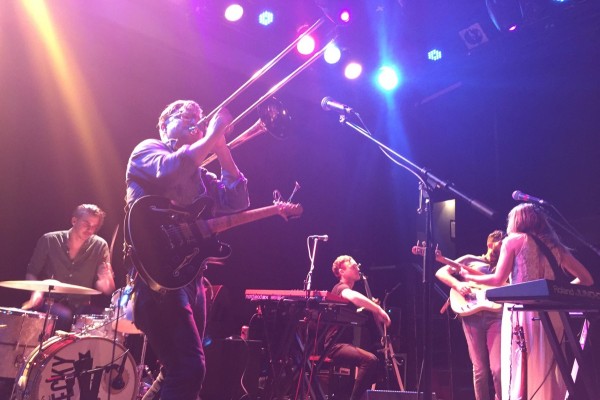 Nashville, TN was represented in a big way at Bowery Ballroom on a Thursday evening in October when Kopecky Family Band brought their multidimensional folk-pop act to NYC. The musical sextet headlined by Kelsey Kopecky and Gabe Simon started their journey back in 2007, but made their splash into the mainstream music scene last year with the release of their debut album, Kids Raising Kids. Trademarked by melodic vocals and a free-flowing stream of instrument swapping between all the band’s members during their set, they put on a fantastic show for those of us in attendance.

Kopecky Family Band titled their current tour, “Putting The Kids To Bed,” which served as both an obvious homage to and a last hurrah for their current album, stating that they’ve already been in the studio working on a second one. Their show followed suit, playing previously released music from Kids Raising Kids and their prior EPs, along with debuting some new material which will most certainly be showcased once their second album is released. Before walking on stage to start their set, the audience was treated to a very fun introduction as the house dimmed the lights and played the Tears For Fears classic, “Head Over Heels”, as the band’s entrance music, which gave many in the audience huge grins and had nearly the whole room singing along. After playing their hit single “Heartbeat” early on, Kopecky Family Band made it clear that they are more than just one popular tune, playing great music left and right to the delight of the Bowery Ballroom crowd.

“My Way” was one of these songs, which starts out sounding like a cross between the works of Best Coast and Cults, but ends up becoming distinctively their own with its driving beats and up-tempo refrain. Another great song was “Are You Listening,” which delves more into the folk parts of their sound, showing off the easy-going harmonies of Kopecky and Simon, especially when added with Simon’s clear and crisp whistling. That trend continued throughout the show with songs like “Casualty” and most definitively “Change,” which featured solely Kopecky and Simon on stage singing about several of Kelsey’s family members’–including herself–personal experiences with love and commitment. It was a beautiful melody that captivated the crowd in a way very reminiscent of another Nashville band (JOHNNYSWIM) was able to do in the same venue a couple months earlier.

A personal high note for my experience of the show was when they ended their set by covering Fleetwood Mac’s “Tusk,” which happens to be my favorite Fleetwood Mac song. Kopecky Family Band did a wonderful job with the cover, complete with Simon filling in for the USC marching band by breaking out a trombone (which he treats with great disdain throughout the show, tossing it about whenever it isn’t needed anymore). It was a great way to cap their set, although they still weren’t done, playing an encore of “Wandering Eyes” before leaving the stage for good. Kopecky Family Band put on an excellent show and really set the stage for what shapes up to be a top-notch sophomore effort when their next album is released.

As mentioned, Nashville was in the house that night, which applied to the opening band COIN as well. A lot less folk, but a lot more pop, COIN is a band that formed in the fall of 2012 and really got the crowd pumped up and ready for Kopecky Family Band later on in the evening. They haven’t released an album as of yet (they mentioned it is slated for release early next year), but their music will definitely find its way onto trendy indie playlists once summer 2015 rolls around, especially their songs “Atlas” and “It’s Okay.” They also played their cover of the Simon and Garfunkel hit song “Cecilia,” which was delightfully indie and another song of theirs not to pass up. COIN is a band to keep an eye on for 2015, but if you get the chance to see them before then, take that opportunity.