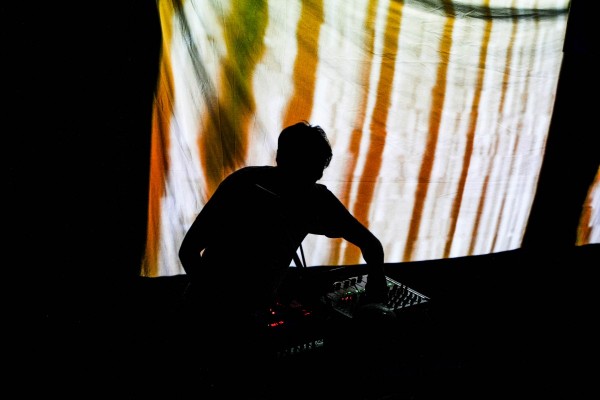 Four Brooklyn bands all debuted spirited, new material last week in an electronic heavy lineup at Glasslands. I ventured forth for the dual release parties of Kodacrome and Kodomo. I left sated, not only with them, but with glimpses at the other two bands who shared the bill, Varick and ohnomoon, who will likely be popping up with their own headlines shortly down the road.

Varick was first on the evening, the newest project on the block. His music is downtempo, serious electronic; not unlike the mellowest industrial has to offer. What I heard sounded strong and clean, especially his single, “Boundless“. That he is backed by a drummer live is a welcome addition as well. However, I need more emotion and expression from Varick before I can become a true believer; it all felt just too static.

Kodacrome (Ryan Casey, Elissa LeCoque) released Aftermaths, their debut album, the same day as this show. The new tracks from it have really added a nice body of work for them to extrapolate on live. Its lead single, “Strike the Gold“, brought their short set to a simmering conclusion. The duo’s already began on their next work, and it will be interesting to see if they can leverage any momentum from Aftermaths.

ohnomoon were the only rock band on the bill this evening, and shone brightly for it. They’re a high energy four piece ft. Kat Lee (vox, guitar, keys), Corey Oliver (guitar, vox), Mike Spivack (bass), and Trevor Gunderson (drums). They land somewhere on the atmospheric sound of rock music, weaving expert soundscapes through their guitars. The group’s working towards their debut; there’s a hodgepodge of singles and covers available online in the interim.

Kodomo just released a new album, his entitled Patterns & Lights. Kodomo is a solo project by Chris Child, known for his complex fusion of ambient and dance. His projections of nature and intricate compositions really allowed me to let loose and free the spirit within. To be lost dancing in my own little world, I can think of few finer ways to end an evening.