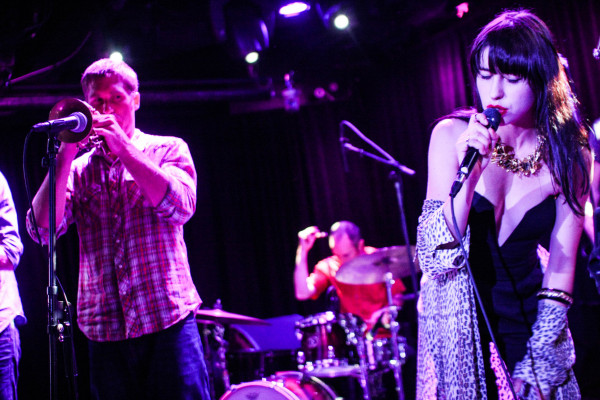 Two continents collided with epic results as American jazz experts, Kneebody, took the stage at Le Poisson Rouge with New Zealand pop maven, Kimbra. The union was borne of Kneebody bassist’s Kaveh Rastegar’s collaboration with Kimbra on her new track “Love in High Places“. The combined star power of the two led to a packed house of many eager to witness the unique event.

The other members of Kneebody are Adam Benjamin (keys), Ben Wendel (sax), Nate Wood (drums)  & Shane Endsley (trumpet), and together the band makes a technical version of jazz that is very engaging musicianship to watch live. They played a half set instrumental, before introducing Kimbra to the stage to raucous applause. Her wild gestures and vocals effervesced the audience and, fed back through Kneebody, made the performance more than the sum of its parts. We heard “Love in High Places” and “Slum Love” from The Golden Echo. Kimbra returns here in November (11/3, 11/6 via Bowery Presents, sold out) to support the new record, while Kneebody is bound for Europe.

Brooklyn experimental quintet, Tiny Hazard, scored the opening spot. The outfit features Alena Spanger (vocals, piano), Anthony Jillions (synth), Derek Leslie (bass), Ronald Stockwell (drums), & Ryan Weiner (guitar). They have a seemingly benign indie pop sound with a dark side; sudden bursts of fury sow discord and give them an edge that makes them stand out. I’d like to hear them score a drama or ballet someday. They’ve got a new single out and headline Knitting Factory on the 28th.