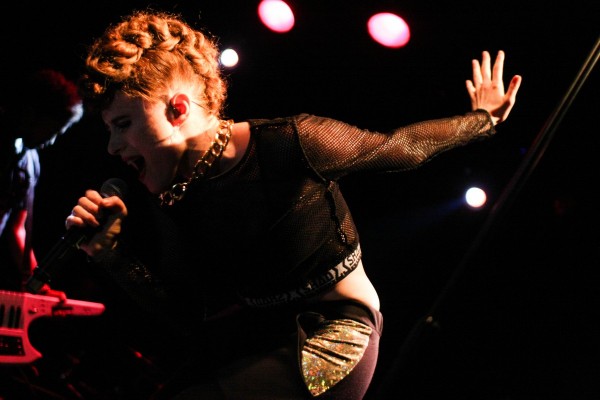 Canadian pop singer Kiesza has been making waves all year long with a handful of expert dance tracks that culminated this month in the Hideaway EP. Her live debut in support of it happened this evening and personally stands as a strong contender for my top show of 2014. It’s immediately evident to me that she has emerged with a quality act and is a name we’ll be hearing around these parts in much larger venues for some time to come.

Kiesza is joined on stage by two backup dancers for a choreographed routine, as well as a dj, keyboardist and drummer. Her expressionistic singing and dancing lent a fair amount of credence to the emotion behind her music. We heard all of the Hideaway EP, including its low speed cover of “What is Love” as an interlude behind the keyboard. Its title track, currently her most popular hit, made for a raucous closing. New song, “Losing My Mind”, and a cover of “Hallelujah“, in addition to a variety of extensions and remixes to her released tracks offered up a nice bevy of surprises to keep us on our toes for her set which neared an hour in length.

Props to Tad Haes of Occupy the Disco for a nice dj set to open the gig as well. The potential of the night was marked early by the quality of revelers (break)dancing to his mixes.

Getting a Glimpse of The New Tarot