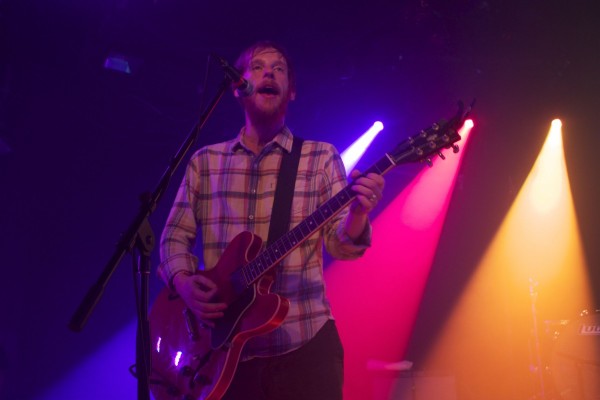 Wrapping up an eight-week run together, Kevin Devine & The Goddamn Band were in high spirits and good company at their final stop of the tour in NYC. Joined by tour mates Dads and Field Mouse on stage, all three bands posed for a group photo and asked the crowd to share gratuitously. Unsurprisingly, Kevin had more than one member of the touring bands join him on stage during highlights of his set. As headliner, his commitment to a shared experience works for both emerging artists and for fans of his DIY life project.

Kevin’s set featured a few key songs from the album Bulldozer, which did not get full tour support after its release. Unlike its highly pop-punk influenced sister album Bubblegum, Bulldozer comes together more like a solo folk effort whereas Bubblegum plays nicer with the live crowd. Tracks like “Little Bulldozer” and “You Brushed Her Breath Aside” worked well as the more high energy, electric jams off of that album. A few songs from Bubblegum stood out as some of the most interesting parts of the set, with an especially smouldering rendition of “Redbird.” Old favorites like “Cotten Crush” brought John Bradley from opening act Dads onstage for tambourine support. Not to forget about his many side projects, Kevin played the Bad Books track, “It Never Stops,” from his collaborative brainchild with Manchester Orchestra’s Andy Hull. Closing out the set was a blast from the past with “Every Famous Last Word,” a song from his earliest recording band, Miracle of ’86. Right then, someone in the crowd made a joke and suggested he play “Mixtape.” Kevin started to play but quickly stopped, which got a huge groan and a laugh from the crowd. I’m pretty sure he would have had more fun playing it than Brand New would have, anyway.

Dads make exactly the kind of music that you want to hear at a basement show in New Jersey. Their live show is intense, entertaining, and more than a little punk rock with drummer/singer John Bradley wailing and playing the drums at the same time. Songs like “My Crass Patch” echo with a restless kind of passion, leaning towards a heavier sound that would appeal to fans of Brand New and MewithoutYou. On first listen, I did not think their live show would be quite what it was, but once I saw what goes into making all that noise, I was sold.

Field Mouse is a dreamy sort of indie band that hails from Brooklyn and seems comfortable with experimenting. With fuzzy synths and keyboards, their sound is as mysterious as it is infectious. Songs like “Bright Lights” are ethereal and a little surf-rock, the kind that gets stuck in your head for days. Interestingly enough, they feature a cover of Joyce Manor’s “Schley” on their Soundcloud. Recommended if you are a fan of a bright, poppy sound like Parquet Courts.

Kevin Devine is known for being a local legend and everyone’s best kept secret. After he successfully raised over $115,000 dollars on Kickstarter and funded not one but two albums, his fan base has never been stronger. Kevin Devine and the Goddamn Band will be at Skate and Surf Festival this year on Sunday May 17th, but it looks like they’re preparing for a little break after that. I’m sure we’ll be seeing Kevin book a few more solo shows in the near future before moving forward with his next project.