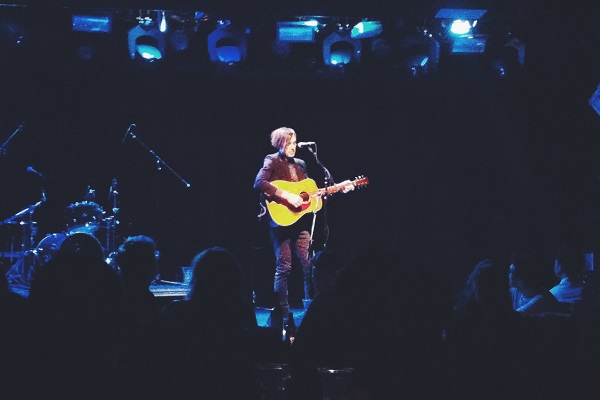 As a rather large fan of of Montreal, I literally jumped at the opportunity to see Kevin Barnes in the flesh – no electronics, no band, no theatrics – only the human being, and his guitar. When I arrived at the venue, the thought of a whole other band standing between me and the possibility of hearing a song off 1997’s Cherry Peel live for the first time in my life was driving me a little nutty. But to my surprise the opening 3 piece Brooklyn-based band comprised of the usual guitar, drums, and bass or another guitar for certain songs, Fancy Colors, was simply just too interesting to be left dwelling.

Showcasing his sweet brass capabilities, Fancy Colors‘ front man played a beautifully polished sax with such a great degree of delay that he could harmonize with himself. His music descended in a mesmerizing spiral that culminated with him switching over to flute and adding another layer to the wall of swirling brass. That intro set the pace for a psychedelic ballad that would left the crowd properly energized for Barnes.

Barnes started off the evening with a few clever words explaining that he was used to not being listened to and being talked over. As the audience laughed, he interjected, “by my parents” perhaps in an effort to encourage good show attending manners in a playful fashion. Then he laid his plans for the evening down on us, “starting off good and steadily down hill from there”, which could not have been more accurate as he opened with “Du Og Meg“, a song that tales falling in love and the culmination of marriage, and ending with “The Past is a Grotesque Animal“, addressing the opposite end of the spectrum, where love dies and you are left to reflect on the experience which was perhaps never as magical as it once seemed.

You could hear the lightness of a whimsical youth in Barnes’s voice as he took you away to the land of new love and just as well, you could hear the the pain, anger, and confusion as he sung, or really almost screamed out, “none of our secrets are physical” right before launching into a vocal version of the epic guitar solo that concludes “The Past is a Grotesque Animal”. As an added bonus, the crowd, at moments, provided some solid backing vocals in the form of ooohs as needed.  Whether singing of the initial wonder and awe that accompanies young love or the pain that often comes later, Barnes always kept the experience so truly intimate and close, I felt as though I was listening to an old friend recount the years of their life I had missed through song.

Barnes led into “When You’re Loved Like You Are” with a cute story from his childhood regarding an uncle Larry whose sexuality had never exited or entered the closet so to speak. With that, I finally got my wish to hear a song off Cherry Peel and even got the added satisfaction of singing along while swaying to the cheerful guitar melody. For the newer fan, another really satisfying moment was to hear “Raindrop in My Skull” sung by Barnes instead of Rebecca Cash, who unquestionably also does a great job. To see a musician reach such a level of expertise mechanically is certainly common, but to see a musician attain such great emotive power is rare and almost requires complete surrender and openness to the array of human experiences we all share.

Kevin Barnes will be returning to Le Poisson Rouge soon with his full band, of Montreal, to perform on May 11th.