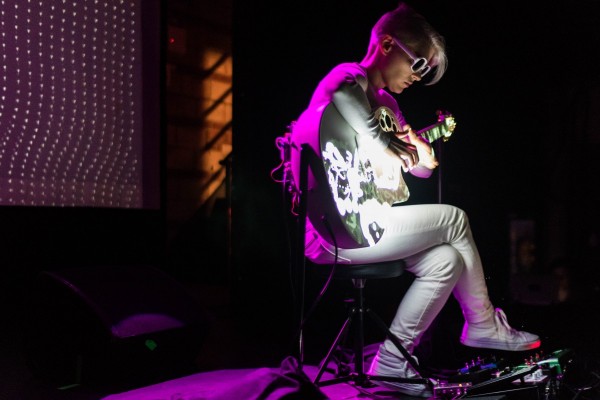 Kaki King has been a name in the space of savvy guitarwork for the past decade, and recently leveled up with an ambitious focus on the visual. Her new album, The Neck is a Bridge to the Body, is the soundtrack to an epic live show filled to the brim with engaging projections. The most interesting part of which is King’s use of a fixed, white guitar which acts as the key medium to accept these lights. As someone who dabbles in a lot of abstract photography, I was transfixed for some solid stretches as her music took an ambient stance to the demands of my eyes. Looking at the still audience, I knew the appreciation was communal.

Opening was Glockabelle, a French singing, art rock duo that embodies synth madness with a manic level of energy output. They should definitely score a video game or two with their talents, preferably something with a million and one flashing lights. The duo is Annabelle Cazes on xylophone, vocals, and synth with Rubin Sindo Acosta wailing on the drums. Cazes would later join on xylophone again for a few glimpses during King’s set.