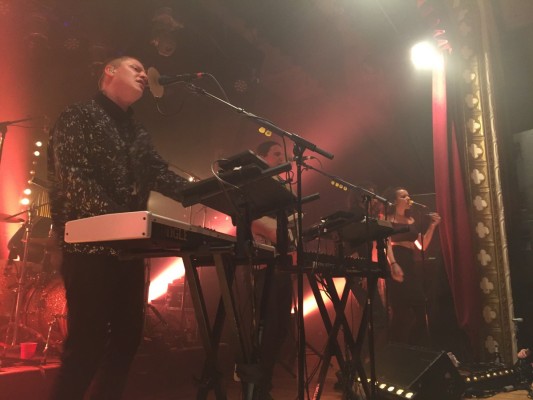 What do you get when you take a Brooklyn music venue housed inside a Polish cultural center and add a seven-piece band from London that plays a modern variety of funk and upbeat soul? You get a wholly unique dancehall experience that changes the way you look at traditional concert going in NYC. The band responsible for such an evening is named Jungle, who if you are still unaware of their music, you probably won’t be for long. Formed in 2013, Jungle’s music is a refreshing bucking of the 80’s synth/electro pop trend sweeping the city, choosing to instead go back in time a bit further into the 1970’s. Their debut self-titled album came out in July of this year to critical acclaim, having already been shortlisted for the Mercury Prize, given to the best album from the UK each year, and whose recent winners include albums by alt-J, James Blake, and the xx.

Jungle started their set at Warsaw that evening by walking out on stage to “Smoking Pixels”, which is a song that you might equate with being from a Clint Eastwood spaghetti western if it wasn’t for the computerized sound woven throughout. In fact, most of their music has the feel of potentially being from a 70’s movie, but the electronic components and perfectly matched vocals of Josh Lloyd-Watson and Tom McFarland give each song a modern vibe that does a wonderful job connecting with the audience.

It’s this vibe that really did the trick for the Warsaw crowd, as Jungle’s music walks the line between music that you simply groove to by bobbing your head and music that makes you want to lose yourself on the dance floor, and it was that combination that made the night that much better. There were pockets of people dancing in smaller groups, but for the most part, everyone sort of lost themselves in the music they were hearing, choosing to experience it individually as they saw fit, especially during tracks such as “Julia”, “Lemonade Lake”, and “Son of a Gun”.

It wasn’t until the end of the show when Jungle really let go into full-blown dancehall mode, playing “Time” and encoring to “Busy Earnin’”, which sent the entire Warsaw audience out of their minds dancing and jumping around in unison to the beat, and it was easily the most fun I’ve had in a crowd since Foster the People at Governors Ball this past June. Jungle has tapped into a sound that hasn’t really been explored much by recent bands, and it’s this fact that makes them enjoyable and unique.

Admittedly, the start of the evening was a little rocky, as the doors to Warsaw opened over an hour late, causing a significant backup and near overcrowding of the bar area. However, this potential issue was negated by the fact that within the building, two women from the cultural center make and serve traditional Polish eats for the shows. So while I waited to enter the concert venue, I was appeased by chowing down on homemade pierogies, which eliminated any issues I had with the delay itself, and about which I can say with confidence is the best food I’ve ever had at a concert venue in the city.

Once we were able to enter the venue, the show was opened by a London-based quartet named Beaty Heart who played drum-heavy, electronic pop with a distinct island feel. Comparisons can be made early and often to Ezra Koenig and Vampire Weekend, with just a touch of St. Lucia, but their show served to be an appropriate appetizer to Jungle, impressing with songs like “Seafood” and “Cola.” Check out their solid debut album, Mixed Blessings, for more of their worldly, eclectic beats.