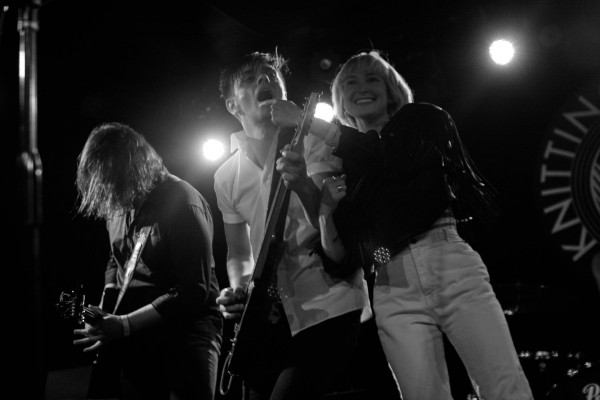 July Talk are on the warpath. The Toronto rock band have conquered Canada and are now setting their sights south of the border. Last week was their first salvo into the American market, with the release of the Guns + Ammunition EP via Island Records. The EP takes a choice selection of tracks from their self-titled debut. They marked the release with a free gig at Knitting Factory.

With it only being 8 PM when they took the stage, and for having a relatively small following here, I assumed the show would be a quiet one. Man, was I wrong. By the close of July Talk’s set the room had filled close to capacity, with a group of converted fans dancing around in the middle, drunk on their music and possibly also their whiskey. Their live set is very engaging, and seeing it establishes them as of the best acts this year, no question.

The dual front by Peter Dreimanis and Leah Fay are why this works so well. Their engaging showmanship is amplified by their interactions that feel very real and unrehearsed. I doubt any two July Talk shows are exactly the same. Behind them are Ian Docherty (guitar), Josh Warburton (bass), and Danny Miles(drums), who complete the musical foundation that brings everyone here in the first place. The music comes out loud and true, and I’ll be coming back to catch it any chance I get.

Check below for my photos from the night, or to see the band in action via their music video for the title track of the EP, “Guns + Ammunition”.