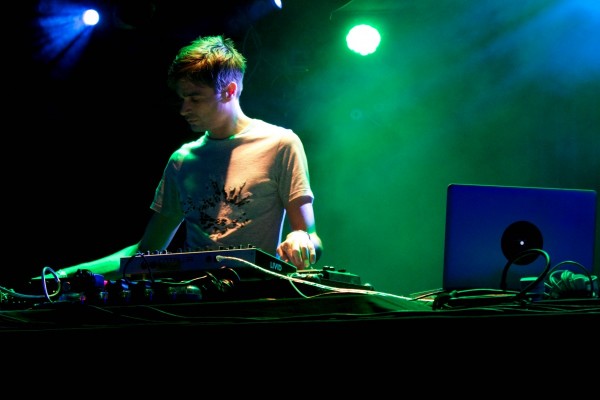 Expert producer and film-composer Jon Hopkins brought some hard-hitting dance floor beats to New York City last week. A somewhat elusive character who started his career playing the keyboard for Imogen Heap, he has since produced albums for Coldplay and Brian Eno and composed the Ivor Novello-nominated soundtrack for the 2010 film Monsters. His albums Diamond Mine (a collaboration with Scottish singer-songwriter King Creosote) and his latest effort Immunity  have both been nominated for the Mercury Prize and gained much critical acclaim. His unique take on aggressive dance floor music turns into a mind blowing experience live. The mood was appropriately intimate and energetic, and the music ready to hit the audience.

Jon Hopkins gracefully builds his songs with natural sounding heavy rhythms, deep pounding bass accompanied by real-world sounds that are layered on top of each other. Some monster songs like “Collider” and “Open Eye Signal” hit you hard. Epic in scope and complex in structure, these songs will make you groove in ways you wouldn’t expect. Hopkins most club-friendly album yet is a refreshing and intriguing take on dance music, a captivating look at the ideas of this English producer whose foray into electronic dance music has been and continues to get more promising, his sound now confident and dramatic.

The Range (James Hinton) performed a set preceding Jon Hopkins. This beat-maker from Providence, Rhode Island produces clear and uncluttered  sounds with hypnotic vocal samples, these are also hard hitting songs for the club and your headphones. A perfect opener for Jon Hopkins set, The Range is a talent to look out for if you enjoy some fast breakbeats, robust piano keys, obscurely sampled hip hop vocals and grime in your dance music. His latest album, Nonfiction, is available to purchase, and songs like “Loftmane” and “Seneca” are worth blasting on your speakers before heading out on a night of clubbing.

The duo behind FIXED parties, JDH and Dave P provided some of the early night groove to get the crowd started and going.