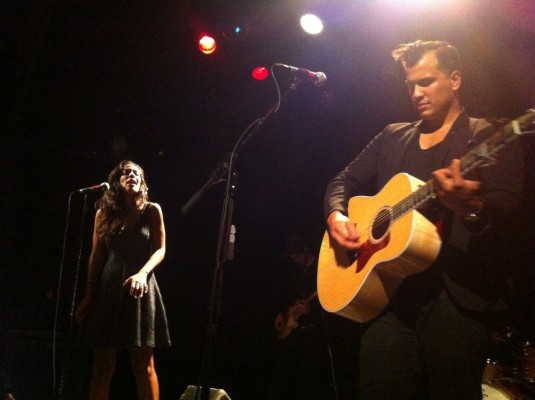 In their song “Take The World” off their debut LP Diamonds, Amanda Sudano Ramirez and Abner Ramirez opine “They can write stories/they can sing songs/but they don’t write fairy tales/sweeter than ours.” Not only does this lyric highlight how the married couple better known as Johnnyswim feels about each other, but it serves to perfectly encapsulate the fantastically entertaining and engaging show performed for the electric sold-out crowd at The Bowery Ballroom on August 19th.

Formed in Nashville, TN back in 2005, Johnnyswim have taken their musical talents across the country for years before finally releasing their first full-length album in late April, “their first baby” as Abner described during the show. Equal parts performers and storytellers, Abner and Amanda can be most readily described as a modern-day Johnny Cash and June Carter both in their music and in the sense that they are completely and utterly in love with each other. To wit, after walking on stage but before starting the show, the couple spent a minute or so standing face to face smiling and looking longingly into each other’s eyes before opening with “Falling For Me,” a song that details the capacity of love each of them has to give to their partner.

Where some musical/romantic partnerships can get annoyingly over the top sharing how they feel about each other, Johnnyswim is able to deftly walk that line and outwardly turn something they see as beautiful into something the audience finds just as beautiful. They genuinely cannot keep their eyes off of each other while the other performs or lovingly gush about how good-looking the other is to the crowd between songs, all of which was properly received by those in attendance, causing most to swoon out of overwhelming cuteness.

More importantly, this isn’t a shtick to gain favor with the audience, as the duo is quite talented on their own merits, creating phenomenal folksy harmonies that blend effortlessly with their instrumental stylings. Pairing that combination with their ability to tell vibrant stories (both lyrically and throughout breaks in their set), Abner and Amanda were able to stir up a wealth of powerful emotions in the Bowery Ballroom audience who were on hand for their nearly two-hour set. Because of this, nearly every song they performed was an experience in and of itself.

After opening their set with a few selections from Diamonds, they started telling stories to compliment the upcoming songs. First up was a touching story about a song Abner wrote for his mother (“Adelina”), followed up by a story about how his father forgave everyone who ever wronged him, a quality Abner stated is one he is yet to learn, before performing the emotionally-charged “Pay Dearly”, a song Abner mentioned was about “not forgiving.” Amanda then proceeded to absolutely level the crowd by performing “Over,” a heartbreaking ballad about the moment you’ve given up on someone, which she promptly took to 11 by singing a few lines of Bonnie Raitt’s “I Can’t Make You Love Me” as the song’s outro.

Johnnyswim was quick to remind everyone that they weren’t just about the heaviness of things, as they both told quite possibly the most adorable engagement story ever before singing a song they wrote together about the experience titled “Paris In June.” And the stories kept coming, including one about how they finally broke into the music scene, all the while having one of Abner’s friends saying they weren’t going to make it. A song about hope as well as a self-proclaimed “suck it” song, “Diamonds” was a fun and rousing offering which had the entire audience singing backup vocals.

During their song “Home,” Abner unplugged his guitar and stood with Amanda at the very front of the stage, rewarding the Bowery Ballroom faithful with an unbelievable unplugged cover of Johnny Cash’s “Jackson,” fully solidifying the ‘Johnny & June’ comparisons from earlier in the show. Closing their set with “Heart Beats,” Johnnyswim finished with a flourish, transforming the room with funky disco versions of “Britney Spears’ “Till The World Ends” and Whitney Houston’s “I Wanna Dance With Somebody.”

Storytellers of the highest order, Johnnyswim certainly have something special going on, and not just in terms of their personal partnership. Abner and Amanda have firmly established their musical identity and are able to convey an amazingly varied amount of feelings and deeply connect to the audience while staying genuine to themselves and their direction. Like many folk acts before them, they are a band that needs to be experienced rather than heard, and in this case, the experience is one that will long be remembered.