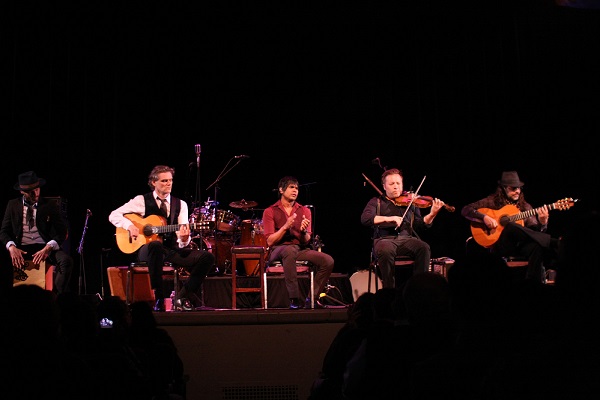 What I take most from the live show of Jesse Cook is the sound of hands. A multitude of them all clapping in unison, to be precise. Jesse uses the audience as his instrument, providing a surrounding sense of percussion that actively engages the listener. This is all beyond his mastery with wielding the guitar in flamenco style.

In addition to his own talents, a powerful band provides a strong foundation for Jesse Cook and forms a quintet live. Bass, drums, rhythm guitar and violin are their primary contributions. The lines would often blur further from the multiple proficiencies of each. With their aid, the live show far transcends any expectations about it being only a man and his guitar.

Jesse Cook’s show was split into two parts, with a marked increase in its liveliness during the second section. Jesse, who is quite adept at stage banter, coaxed the audience into turning the space into a rumba dance hall at its tail end. At least where I was in the front, there was infectious merryment amongst the crowd. A two encore conclusion featured most of the vocals of the performance; 2000’s “Fall At Your Feet” and their traditional cover of Simon and Garfunkel’s “Cecilia“.

Jesse Cook has been performing professionally for almost twenty years now. The Canadian musician released his first album, Tempest, in 1995. 2012’s Blue Guitar Sessions marked his eighth record, and is described as his foray into the emotion of sadness. His tour heads westward from here and concludes in June.