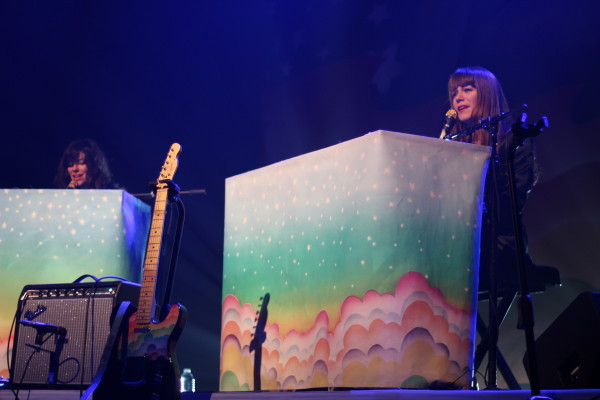 At Neat Beet, we spend our time covering the musicians and bands that influence music. If there was a list of the most influential musicians in recent years, we could safely agree that Jenny Lewis could be considered as a top-contender. We know her quite well as the front-woman for indie powerhouse Rilo Kiley and many had a chance to see one of her other, equally well-known projects The Postal Service hit major festivals and tour arenas nationwide. What makes her a shining beacon in the music world is that her third studio album entitled The Voyager may be one of the most critically acclaimed folk rock albums of the year.

The LP had the commercial carry and support by Warner Bros. Music and the top-notch production of fellow rock musician Ryan Adams. But it was Jenny Lewis’s heartfelt, fervent lyricism that truly pushed the album. And it was the very same that she brought to her live performance at The Space at Westbury.

The night opened with Girlpool, a stand-out act at CMJ this year and the opener for all of Jenny Lewis’ tour dates state-side. The duo comprised of Harmony (bass) and Cleo (guitars) was a slight contrast to the extensive band Jenny Lewis performed with but had the lyrical talent and harmony/melody fusion that made them perfect for this tour. Their raw energy and garage sound was welcomed warmly by the crowd. Getting a chance to speak to the band afterward, they did mention that their Terminal 5 show from the night before was one of the largest and most exciting they had done (so far) but they expected similar, big opportunities. (especially in the New York-area)

Jenny Lewis’s stage was adorned with a backdrop and a set of uprights adorning the warm abstract landscape found on The Voyager album art. It’s worth mentioning this because it matched the intimacy of the show’s small crowd but contradicted the energy the band emitted. The evening’s set list was a plethora of different projects, including a miniature set in the middle of the evening of just Jenny Lewis with The Watson Twins material. Rilo Kiley fans may have been disappointed with only a small portion devoted to the band’s lengthy discography but anyone expecting to see portions of The Voyager live would have left the show more than pleased.

Jenny Lewis’s set list from the Long Island performance is found below.