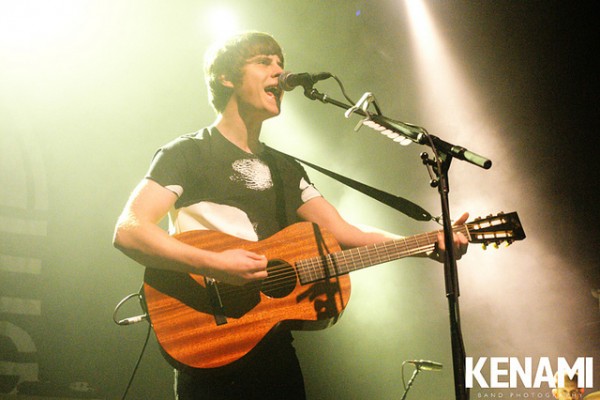 The night of January 10th may not have been as staggeringly cold as those that had plagued the city of New York weeks before thanks to the polar vortex, but those that lined up early to queue for Jake Bugg’s sold out Terminal 5 show were definitely feeling the chill in the air as they danced in place and rubbed their hands together in a mixture of both physical discomfort and anticipation. The nineteen-year-old headliner from Nottingham has acquired a large collection of diverse and dedicated fans in the year since his self-titled debut album was released in 2012. As 2014 began to set in, the young singer returned to New York once again: this time, on tour for his second album, Shangri La. His support acts, the similarly youthful Brooklyn-based band, The Skins, and New York City sweetheart, Albert Hammond, Jr. (of The Strokes fame), also served as incentives for some to attend the show.

Ranging from the ages of fifteen to twenty-one, The Skins, a five-piece band consisting of three siblings and family friends exhibited an incredible amount of energy right as the night began. The Skins’ sound, one that clearly drew inspiration from a plethora of music genres – not the least of which seemed to be classic rock, ultimately came together to produce a feverishly soulful sound that inspired even those who had never previously heard of the band to start getting down. While people danced, a proud Adrian Grenier, head of Wreckroom Records – the label to which the band recently signed, could be seen walking around the venue personally promoting the band by boasting one of their t-shirts. The group’s electric performance was positively received by the large crowd, and their command of the stage displayed an impressive level of comfort, something that even some of the more-established acts who find themselves playing T5 can sometimes lack.

Albert Hammond, Jr. and his band filled the stage after The Skins exited, explaining briefly their aim to play as many songs they could in the time allotted. While this left little room for banter, the uniformly-dressed bunch made their way through an extensive setlist consisting of a mix of both old and new material. However, despite the time crunch, nothing felt rushed or distracted, and, while many of the people in attendance may not have been as physically responsive as they were while The Skins played, it was easy to spot and hear the clouds of fans amongst the audience.

Bugg finally hit the stage at around ten with his familiar saunter and lack of facial expressions. He began his set strong, opening with the first track off of Shangri La, “There’s a Beast and We All Feed It.” and moving straight into crowd favorite, “Trouble Town.” The setlist, much like Hammond, Jr’s, consisted of equal parts old and new.

Despite the audience’s eager dancing and singing, Bugg himself seemed to exude more apathy than a detached sense of cool. Although this aspect of his persona has all but become his trademark; for the most part, it did not translate well. However, once Bugg hit the halfway mark in his set and transitioned into the first of three acoustic songs, one could finally discern passion in his voice. The mood shifted briefly during this solo portion, and these fleeting moments clearly demonstrated that there is definitely more to the otherwise stoic youth than the majority of his act might suggest.

Once his backing musicians entered onto the stage again, the rest of the show went by quickly, punctuated by many of his faster-paced numbers. The encore, consisting of the Oasis-esque “A Song About Love”, and indie radio staple “Lightening Bolt” rounded out the evening nicely. As the quiet singer gave a genuine thanks to the audience for coming out, it was hard to hold his previously taciturn  demeanor against him. Overall, the impassioned audience reacted with nothing but great enthusiasm, which seems to suggest that the less-than-charismatic numbers failed to even register with most ardent fans. Ultimately, the night was a pleasant experience that featured an impressive collection of skillful musicians at different stages in their careers. And given Bugg’s youth and obvious talent, it seems that he will have plenty of time to improve upon the weaker aspects of his act as long as he continues to perform as he did this evening.