Iron & Wine Played Intimate Show at The Space at Westbury 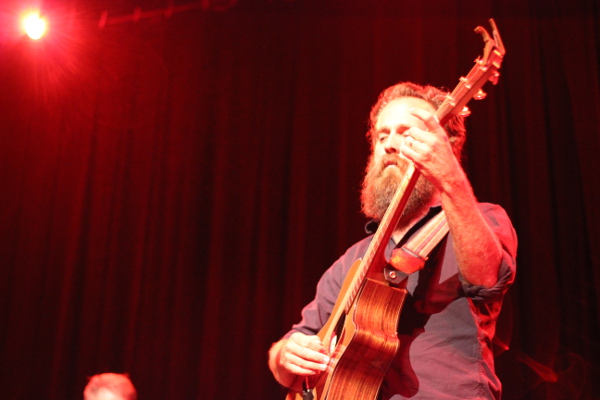 The old adage, “third time’s a charm” certainly echoed truth on Thursday, June 26th when Neat Beet made their way to The Space at Westbury for its third show since its opening. The venue welcomed the loud intensity of both Billy Idol and Conor Oberst. We were very excited to see if the venue embellished the softer tones of Sam Beam, the beating heart of the folk project Iron & Wine.

The Secret Sisters graced the stage beforehand, providing the toe-tapping, jaunty tunes quintessential to country music. A (very) brief moment of culture-shock washed over the faces of many in the crowd, likely as a result of the duo’s wholesome Southern charisma and a sound that matched. Best known as a Hunger Games OST contributor and a hand-selected Bob Dylan collaborator on “Dirty Lie”, a previously unfinished track (which they both performed)  The Secret Sisters’s most unforgettable trait was their lack of secrecy, offering hilarious yet heartfelt anecdotes behind the writing process for many of their songs.

The crowd at Westbury was much smaller than I (and much of those in attendance) anticipated but this came as a delight to both the audience and the band themselves. Sam Beam’s genuine demeanor was not far off from Laura Rogers, Lydia Rogers and Co. Although a man of fewer words, Beam and Co.’s set was best acknowledged by the recomposing of most of the studio tracks he performed and a very engaging 40+ minutes of audience requests. The soft, lush undertones of both Sam’s vocals and the 5-piece accompaniment resounded great throughout the venue. (even moving from the floor to the “nosebleeds” section)

Below are photos from the intimate show. Although there are currently no tour plans for Sam Beam & Co, The Secret Sisters will be back in the Tri-State region to open for another iconic folk-group. The Rogers sisters and recently reunited Nickel Creek will play a free concert at Prospect Park Bandshell as part of the annual Celebrate Brooklyn! concert series. The event happens on July 24th.

Tagged: iron and wine, the secret sisters, the space at westbury