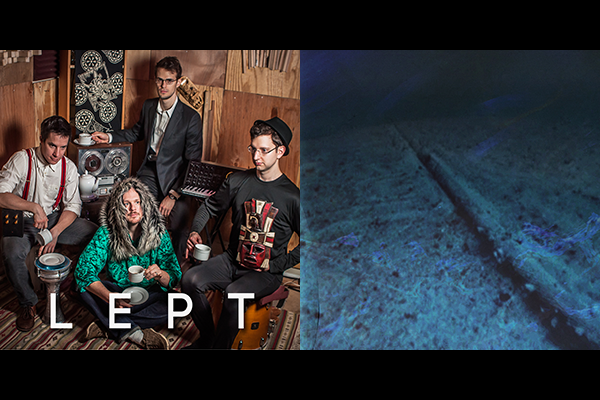 The “Zulasphere” is a new word I’m coining to describe the activities of the musicians in Zula, who should be well known amongst adherents to the NYC indie scene by now for their 2013 LP, This Hopeful, and their incessant gigging. Last week, within this “Zulasphere,” two new projects were announced, LEPT and Zula/annex.

LEPT is an instrumental outfit that is steeped in Krautrock and world influences. It involves Henry Terepka and Pablo Eluchans of Zula and is rounded out as a quartet by E. Scott Lindner, who helms the project, and Jim Panels as a tech and synth expert. They released a self-titled debut just last week, but actually have been playing together as a cohesive unit for more than a few years now, where they were formerly known as The Static Rising.

Due to the complexities of their arrangements, it’s unlikely we’ll see a leap outside the studio frequently, if at all. They are planning a second release this year. If you have commercial needs, LEPT is an outreach of production music house, Pinch Music, which all of its members contribute to. Also if you haven’t guessed what “LEPT” is, check out the first initial of each band member’s last name.

Henry Terepka is the common link between LEPT and Zula/Annex, which consists of him, cousin Nate and composer Darko Saric of 4 Elements Music. Their release, the Water Pressure EP, is a more wild and glitchy experimental pop sound, not at all unlike Zula proper. There’s some prevalent themes in the realms aquatic and technological if you dive deep enough.  The EP officially releases next Tuesday on Inflated Records.

Zula’s bassist, Noga Shefi, is not involved in either of these projects, but was on stage recently with Felicia Douglass of Ava Luna. Felicia is prominently featured in their bumping, new single, “Coat of Shellac,” which I’m vibing to just as hard as everything aforementioned. Their new album, Infinite House, is out on 4/14 and they’ll be playing a couple release shows in BK on 4/17 & 4/18 at Baby’s & Silent Barn.

Zula proper have yet to announce a followup LP, but they’re definitely super busy. A trickle of material from their rehearsals and jams has been appearing on their tumblr every so often, and their live sets are becoming increasingly unfamiliar (in a good way.) You can catch them this week on Friday with Inflated Records labelmates, Leapling, at Secret Project Robot, and again on the 28th supporting Deerhoof and Perfect Pussy at Webster Hall.