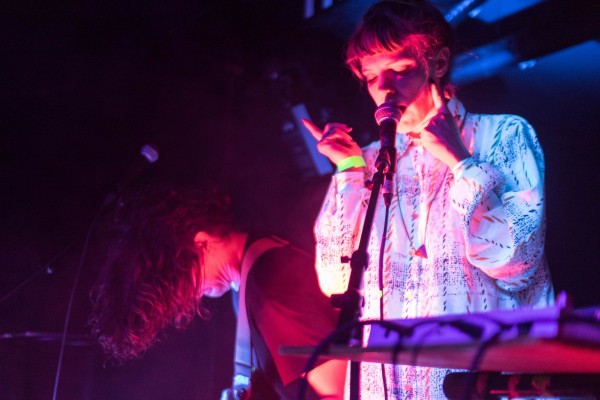 In dark basements, with flashing lights pulsing, is where Omaha, Nebraska rock band Icky Blossoms truly come to life. Their brand of dire, distorted dance music carries with it a true sense of catharsis. And I’m all the more convinced observing their devotees surrounding me dancing with abandon. The members of Icky Blossoms stoke that fire with authentic showmanship and make me a believer.

My love affair with them goes back to 2012, when I bore witness to them playing MHOW with Crystal Fighters. Their performance left me holding a torch until I could renew my vows this evening. Now, they’re adding to their discography with a second album, Mask, out next week via Saddle Creek. Check out the gruesome video for its first single, “In Folds.” Their tour from NYC now snakes along the Southeast before returning home. I hope I do not have to wait three years more to see them once more.

Chiptune riffers Infinity Shred were tasked with opening the night, a billing that sweetened the deal for me. I’ve been aware of the group since they played a special set at Glasslands in 2013 with The Depreciation Guild. The music on their album from that year, Sanctuary, still resonates with me for its atmospheric impact. No news on new material from them, but their convincing live activity leaves me optimistic.

Solo electronica producer Moon Bounce lead the night off. His frenetic motion and energy gave me some real enthusiasm. His latest music video is “Fool,” which makes me want to slither across the dancefloor. He’s Philly-based but frequently in the area. I hope to catch him again really raising the roof somewhere; he’s got the charisma for it.

On the Beet With Stereo Off