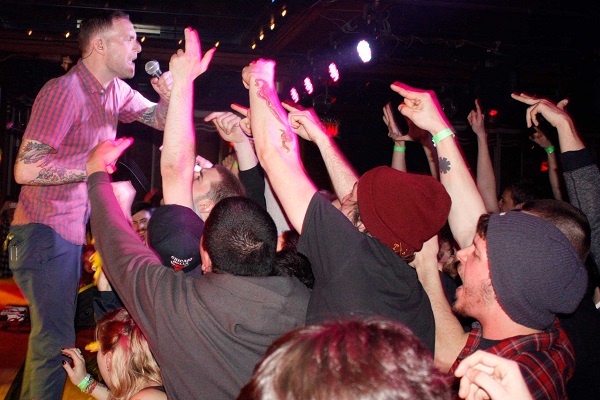 Hometown shows are known for being the best stop on a tour, and when you’re from Long Island you can guarantee the whole town will come out to point fingers in your face and sing along. I Am the Avalanche celebrated the release of their third full-length album, Wolverines, with a packed house and a solid lineup of up-and-comers for support. The Marlin Room (which is largely reserved for house music at Webster Hall) was a nice change of space for old fans and friends to share in their success.

I’ve met openers Bellwether a few times before and their following is noticeably growing. Tearing through a high-energy set, their take on pop-punk leans more towards that of a college indie band than of one playing in basements and parking lots. Hearing the crowd sing along to songs like “Roots” carries the optimism of blasting Tell All Your Friends as loud as you can, while driving down Sunrise Highway with the windows down. Their ability as openers to control the crowd in this strange and unfamiliar dance-hall demanded respect, converting those who came early into immediate fans.

Turnover’s set leaned towards the more sophisticated, alternative side of the genre dominating the evening. I found myself comparing them to Saves The Day, with their newer material showcasing a clear maturation in sound compared to the old. Songs like “Most of the Time” were particularly bright on the heartache. Next up were The Swellers, who reminded me of The Ataris in the best way possible. This band packs a heavy one-two punch, like any good Midwestern band will do. With soaring guitars and shout-along lyrics, songs like “The Best I Ever Had” got the room moving and excited for the main event.

After opening with the new song “Two Runaways,” singer Vinnie Caruana immediately addressed the crowd, ecstatic with the response to the new album and slightly surprised with how many people knew all the words; the album had only been available for a week. “I Took A Beating,” and “This Is Dungeon Music” were obvious crowd-pleasers, with newer songs like “177” sure to become favorites soon enough. Closing the set with “Gratitude” was a nice touch, an obvious tip of the hat to their dedicated fan base. Playing only one song “Brooklyn Dodgers” as an encore, he band left the stage to riotous cheering of “AVALANCHE UNITED!” It’s hard not to feel at home during a chant like that.

Anyone who’s been following IATA all these years can tell you how satisfying it is to see them keep at it, while bringing new and talented bands up along the way. In the fashion of a true hometown hero, they will put out ten times what the crowd gives them in return.

I Am the Avalanche

Tagged: Bellwether, i am the avalanche, Marlin Room, The Swellers, Turnover

looks like this was an awesome show. i will now be checking out turnover due to your description. great review!

I listened to Turnover after reading this too actually, thought they were pretty rad!