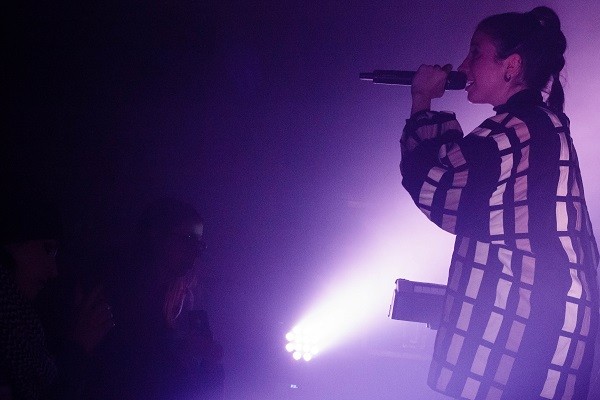 They are not your ordinary indie band. Gainesville, Florida’s Hundred Waters has a sound that meets at the crossover of electronic pop and experimental or even art rock. The output, especially in a live setting, simply generates a fascination. They performed a hypnotic set at The Ballroom at The Outer Space in Hamden on March 3rd.

The opening performer was Mitski, who flaunts enormous vocal prowess. Her third album Bury Me at Makeout Creek was an indie success and the live material was just as angst-filled as the studio versions. She really brought the heat with “Townie”. Mitski will be back in Connecticut to open for Speedy Ortiz at The Space on April 24th, a billing that will cater more to rocking out.

The physical stage they set is what amplifies the presence of Hundred Waters right off the bat. The haze-filled ballroom was filled with varying light effects that would bathe the performers in pinks, blues, and purples. It gave the show a cool feeling and ethereal vibe. The presentation was lacking only because some of the band’s costuming wasn’t present as it has been on other stops of the tour. Nonetheless, vocalist Nicole Miglis displayed her elegant voice with confidence, while supporting some tracks with a set of keys of her own.

Possessing a strong catalog of material, Hundred Waters’ had no problem satisfying the audience need for particular tracks. Songs like “Boreal” from their self-titled LP sounded completely as if they had just been released. The short gap was bridged with newer material from The Moon Rang Like a Bell. The haunting beats and creepy electronic surges of “Cavity” were totally compatible with a physically misty venue. The winding sounds of “Down From the Rafters” became one their strongest servings as it broke down into dancey pings. With an a pleasing aesthetic appearance and a delightful sound, get Hundred Waters on your list of artists to see live.