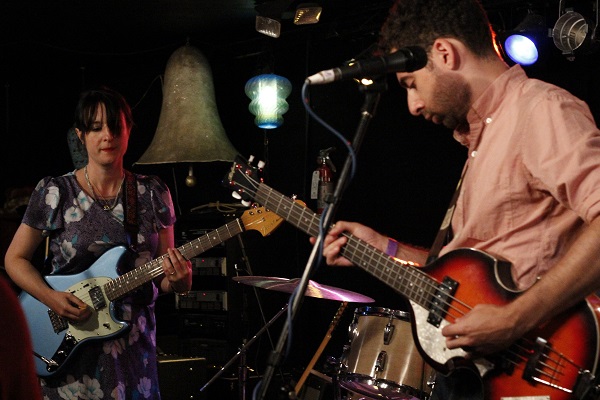 July 29 was an evening that did not lack in sweet, thoughtful and well-crafted indie pop. Merge Records‘ gem, Hospitality, headlined The Space in Hamden, CT. It was their first time in Connecticut in a few years, and they were naturally armed with some new goods this time around. They were accompanied by Frankie Cosmos and Porches, a pair of projects that emerging singer-songwriter Greta Kline is involved with.

Greta Kline (daughter of actor Kevin Kline) was a cornerstone of the evening’s opening acts. As Frankie Cosmos, Kline played an extremely stripped down set that featured her performing without her standard backing cast. Her youthful vocals and charm didn’t seem forced and proved why she seems to be developing quite the following. The material was reduced to simplistic guitar and vocals, giving us a cool perspective on Kline’s fantastic songwriting which could be showcased on a larger scale in the near future.

Following the Cosmos set, she picked up  the bass and joined her other bandmates from Porches on stage. Frontman Aaron Maine is also the Frankie Cosmos drummer, and he had helped out briefly in the previous set. Porches was a slight change of pace, as they performed some much more hazy, synth-riddled indie and plenty of material from their 2012 full length release, Slow Dance In The Cosmos.

This years release of Trouble only built off the creative flair that landed Hospitality with Merge Records back when their self-titled debut was released in 2012. Their set was chock full of new material with some strong old tracks like “Friends of Friends” and “Argonauts” sprinkled in. Amber Papini’s soothing vocals shined throughout  and in the particularly jazzy “Going Out”. There’s no shtick to Hospitality. It is very clean cut indie pop that happened to sound very good live. Capping off the set was the peppy “I Miss Your Bones”, and rest assured that the band was sorely missed as soon as the song was completed.

Check this link for the full photo set.