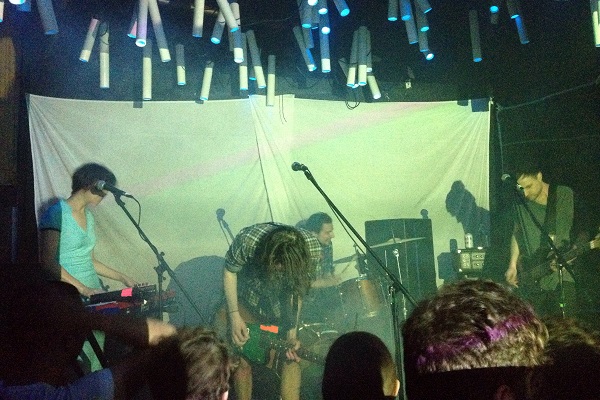 New York City-based quartet Hooray For Earth played a show at Glasslands Gallery last Cinco de Mayo. The band originated in Boston from home recordings of multi-instrumentalist and singer Noel Heroux; fans of experimental and electronic rock should definitely check some of their work out. Before going to their show, I gave their Momo EP a listen and was immediately drawn to their catchy lyrics, and fun electronic beats. The show was one of ambient music and static visuals, mellow tunes and sing alongs.

Their set consisted mostly of songs from their full length debut LP True Loves and a new single, Keys, which was conveniently released a day after the show. At some point Heroux pointed out to the crowd that it was really fun seeing us sing aloud to unreleased songs. Keys has potential to be a big hit single during the summer and for good reason, Hooray for Earth’s music is catchy, fun, and clean amidst the several layers usually present in experimental electronic rock.

The show opened with The Great Void, the work of Josh Ascalon (who also produced and contributed to past Hooray for Earth albums) and in company of a live band consisting of several members in the experimental rock scene such as Neon Indian and Bear in Heaven to drop a few names. This was followed by solo act Ejecta (she had an absent bandmate), a more mellow act also attached to Neon Indian. It was a welcome break in between to bands full of raw energy.