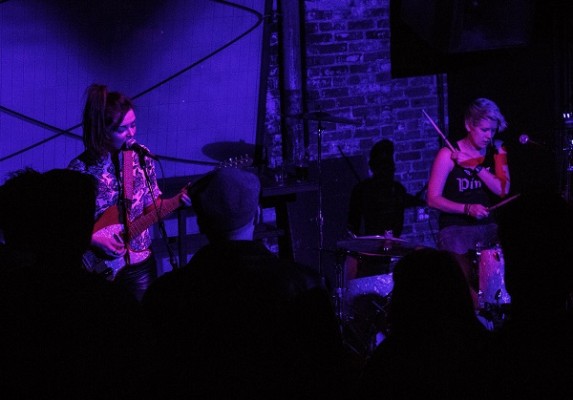 Very few bands immediately capture my attention lyrically, but Glasgow duo Honeyblood strikes all the right chords with me. It is easy to get lost in the way a band sounds, which is a strong point of the band and plenty of others. However, I found myself comfortable singing along with their tracks at the start of the second listen. That rarely ever happens, and that is how I knew I had to see these ladies live at an intimate show at New Haven’s BAR.

Behind the sweet charm of vocalist/guitarist Stina Tweeddale is an immensely powerful voice, as she sang about uncertainty in the pungent “Killer Bangs”: “I don’t wanna have to go, go on without you, but I have to”. She channels her frustration and angst in “Super Rat”, repeatedly making it clear that she “will hate you forever”. It became evident that she packs a serious punch behind the cute exterior.

Between Tweeddale and drummer Cat Myers, the duo produced a very complete sound. It doesn’t matter that they are devoid of bass. They cruised through a good chunk of songs from their 2014 self-titled LP. I was pumped that they played “Biro”. The track carries a subtle modulation in the chorus that gives me a brief touch of euphoria. “Bud” was another standout in the set. These ladies just finished up making some noise opening for Belle and Sebastian and should hopefully be out and about on tour later this year as well.

I am literally always bumping into loom. They seem to land a spot in every single area show a target, and I’m not complaining. They brought the good vibes as usual, this time with a new bassist. Going forward, we may hear some more pronounced bass from the group as we are expecting new music from them in the near future.

It’s been what feels like ages since I saw Violent Mae perform live, opening for Marissa Nadler back in July 2014. The emphatic duo was back at it shredding on guitar and blisteringly pounding the drums. They’re another local mainstay that is always a pleasure to see and well worth the attention.