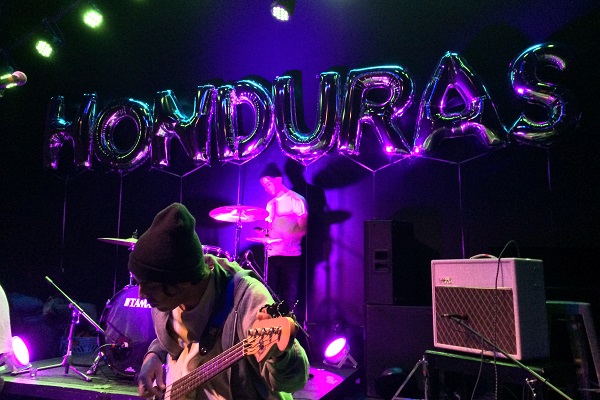 Some bands just manage to instantly attract people’s attention and keep them hooked with as little as the first few notes of a passionate opening number. Brooklyn-based four piece, Honduras, is such a group. Their sets, composed of surf-rock-infused songs filled with undertones of 70’s British immediacy, are performed with an effortless charisma that is an undeniably enjoyable experience to behold. Whether headlining or supporting, as they did for Kaiser Chiefs and Drowners recently, the quartet consistently put on wild shows that send a jolt through the audience and leave an impression.

Honduras celebrated the release of their second EP, Morality Cuts, earlier this month with a gig at Radio Bushwick. The venue was decorated for the occasion, with the band’s name spelled out over the stage in reflective, helium-filled letters.
By the time the guys hit the stage, the venue was filled with a loud, visibly eager crowd. The group started off strong and maintained momentum throughout the night. The performers exerted themselves as they delivered their sound with a raw energy; the crowd responded with cheers, singing, and real dancing (not the all-too-common head bob, foot tap, shoulder-shift combination that can be seen at the majority of concerts in New York). The set, which was ten songs long, went by in what felt like a flash, leaving those in attendance anxious for more but ultimately satisfied and buzzing from the residual adrenaline rush.

The band has been doing the rounds: playing their fair share of shows throughout Brooklyn as well as a line up of shows this past week at SXSW. With any luck, word of mouth about their electric performances and fun music will spread quickly. Those that have yet to catch one of their many live sets should most definitely look into remedying that situation, and people who have and enjoyed themselves, should be aware of how much better the group sounds with each passing show.