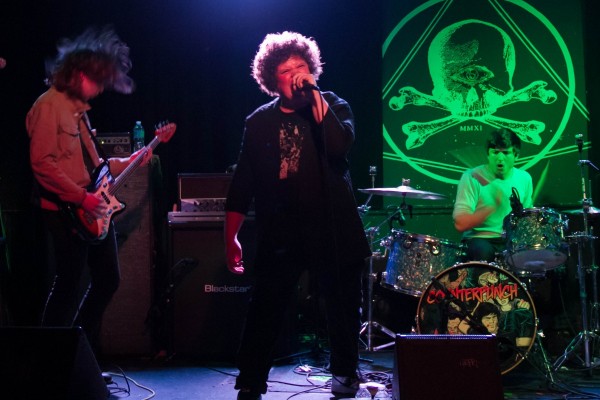 Taking a trip to Brooklyn’s northernmost music venue, Saint Vitus never fails to host the most unique shows the area has to offer. A Metal venue at its core, the space is known to  a slew of up-and-coming and established metal, hardcore and punk acts from the five boroughs and beyond. For this show in particular, the Monday night audience was treated to a glimpse into the prominent Norwegian metal scene when Oslo natives Haust came to shred.

Norway is known for providing the world with some of the darkest metal productions the genre has scene, and Haust is no exception. But as stated from the band’s frontman Vebjørn Guttormsgaard Møllberg, and bassist Henrik Myrvold in a pre-show interview, the band has grown out of a punk foundation to find itself experimenting with different metal sounds and atmospheres. This unique growth has kept the bands main songs churning and punchy while allowing a darker overtone to fit nicely over its core. This steady building bass driven sound played perfectly to the crowd and seemed to overflow the intimate confines of Vitus.

Vebjørn delivered a surly, intense and heated performance while he dominated the stage and front of the crowd with his physical presence and intense thrashing. The energy level of the small venue seemed to rise with every song as the audience grew larger and was captivated by the unique and tremendous vocal manipulations and progressively more intense set. Playing mostly songs from their new album, Bodies, by the end of the set, the stage was soaked in beer and the bruised band members had pushed the equipment and small space to its limits.

Feeling less like a warmup and more like a Brooklyn storming, the band recently went on play SXSW where they undoubtedly left their impression on the metal contingent of the festival. After planting some seeds in the US, the band will return Norway to continue preforming and exploring new musical directions but I would not be shocked to see them headlining some larger venues next time they venture back to the states.

Three Nights With The Cribs During Their Different Angle Residency