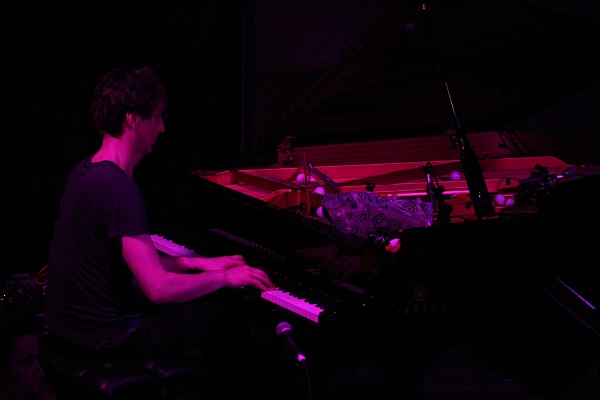 German composer Hauschka has become known for his prolific work with the prepared piano. His latest album, Abandoned City, marks his eleventh release as a pianist (he dabbled with techno prior). His performance at Glasslands was an exciting departure from the norm for the venue. A massive, mirrored piano dominated the stage and the monitors were gone, making for an almost alien landscape in the familiar venue.

Hauschka’s music is entirely instrumental, so all eyes were on his hands. When not darting back and forth along the keys, he would be tinkering with the piano’s equivalent of a pedal. In between songs, new objects would find their way in and out of the piano. The show’s finale featured a bag of ping pong balls in the piano, which made for a visual treat as they bounced inside its confines like playful sprites. The music, complicated and charming, brought a warm, intimate feeling to the warehouse space.

Hauschka brought along a skilled cellist to open this show and perform alongside him. Jeffrey Ziegler, formerly of Kronos Quartet, covered a variety of orchestral pieces by varied composers. They tended to err towards the darker side, and each’s idiosyncrasies, highs, and lows proved a good showcase for the range of his mastery with the instrument.