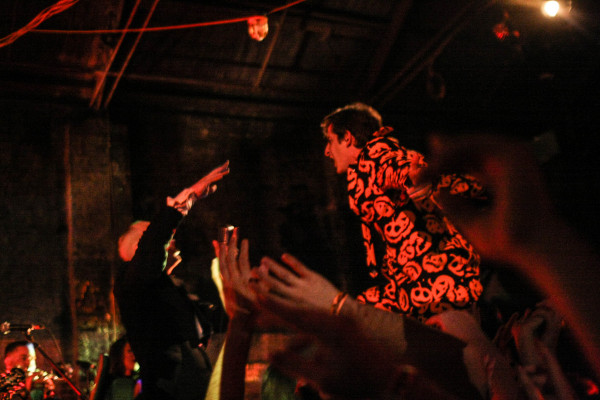 A year has passed since The World Inferno Friendship Society celebrated the sacred Hallowmas while simultaneously mourning the death of Grace Talicious, singer of the band Paranoid Style. Neat Beet caught up with front man Jack Terricloth to chat about what the WIFS had up their sleeve for the festivities this year, but secrets like that must be well kept. With their latest album, This Packed Funeral, set to be released on the seminal punk label Alternative Tentacles at the very same time, there was much to anticipate. As the arrival of the Great Pumpkin drew closer, we caught guitarist Francis Morin during sound-check and spoke of the general excitement for the album release, and the “motivation to get something done” which the band has felt all year.

At doors, the line stretched from out The Wick and down the block past the industrial buildings. Towards the front of the line stood a couple from Edenfield, CT who claimed to have brought the biggest jack-0-latern as an offering to The Great Pumpkin. Leaving it in the patch with the rest of the gourds, I asked what they hoped the Great Pumpkin would bring them in return. Since it was their very first Hallowmas, they weren’t too sure but crossing their fingers to get out of debt sometime soon. Once inside, we met Colin & Annie from Rhode Island who were dressed to the nines as fancy skeletons. Two years ago a blizzard sabotaged their first attempt to catch Hallowmas, but this year they finally made it out. “It’s tough to love Halloween when you live in New England,” Colin lamented, and spoke of how excited they were to finally be hearing the new album. The pair had refused to listen to any of the new material before the show, choosing to experience it first at the mercy of a live show. Always drawing a diverse crowd, we spoke to fans who had flown in from as far as LA and even one who had traveled in the trunk of a car all the way from D.C.

Opener Emilyn Brodsky played bright and zany music on her ukelele bedecked as a skeleton. Born and raised in New York, this suburban darling is as soulful as she is quirky. Her latest album Emilyn Brodsky Eats Her Feelings was produced by former WIFS member Franz Nicolay, which set her up to be well received by the Hallowmas crowd. Emilyn comes off like your rough and tumble grade-school crush, who’s been hanging out with the skater punks and now you’re too scared to talk to her because she’ll break your heart. Songs like “Paper Thin Line” had me thinking of singers like Laura Marling. Telling the crowd she had been a fan of the WIFS since she was 14, she admitted happily that she was now going on 30 and proud to still be an Infernite.

Gone were the white flowers and the elegance of a funeral, replaced with dim orange warehouse lights and the bright smiles of fans holding shiny new vinyl records. The apostles of the great pumpkin were out in full force, handing out literature and accepting offerings for the Great Pumpkin himself. Then, all at once the band came through the crowd in marching-band style with Terricloth leading on a megaphone. A projected backdrop of flickering flames engulfed the stage as the drums swelled for “Tattoos Fade.” The fire motif continued throughout the night, with bassist Sandra Malak toying with hand-made pyrotechnics during songs like “Incendiarism.” We were treated to “One For The Witches!” a rare early tune off of The True Story of the Bridgewater Astral League, their first full length album from 1997. In full circle fashion, new songs like “Elegant Solution” were played seamlessly with favorites like the “Politics of Passing Out.” “Go Faster Think Better” made a notable appearance on the set-list as well, having been re-recorded from the original Turnstile Comix #2 EP for the new album. There was absolutely no semblance of the night winding down, as the Great Pumpkin was raised in a flash of smoke and lights. Huge balloons with jack-0-lantern faces floated through the crowd, and all who were sincere were rewarded.

The WIFS embarked the very next day for a full tour, stopping first in New Orleans for Voodoo Festival and moving onwards throughout the Southwest. If you missed Hallowmas, be sure to check out the World Inferno tour dates and catch them if you can. Otherwise, give This Packed Funeral a listen while you write your letters to the Great Pumpkin and if he thinks they’re sincere enough, you can make it out next year.

Bad Religion Hosted a Battle of the Centuries

On the Beet: Jack Terricloth of the W/IFS details This Packed Funeral, Hallowmas