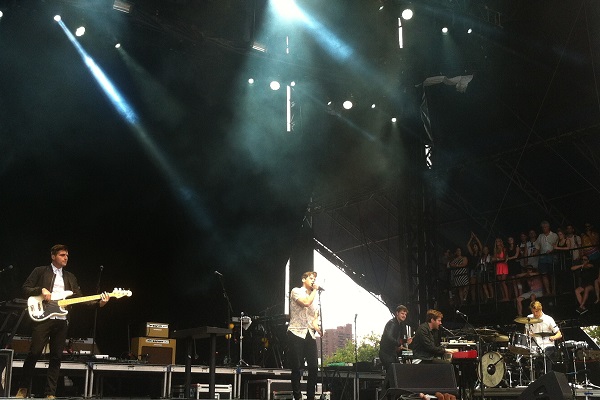 Coming off a fantastic Saturday at Governors Ball, I was yet again excited to see what the third and final day at the festival had in store, and not surprisingly, and I wasn’t disappointed. The weather continued to cooperate with sunshine and comfortable temperatures, and the lineups were really good as well. Here’s a look at the acts I happened to catch on Sunday.

Third straight day; third straight 12:15 show. This time it was singer/songwriter Meg Myers, who despite the grossly underattended concert at the GovBallNYC Stage, wowed the audience with her powerful voice and emotionally-charged performance. “Curbstomp” was a crowd pleaser, but she really endeared herself to those in attendance with her performances of “Go” and “Desire.” Meg Myers has the pipes to continue to make a name for herself going forward from Governors Ball, and like The Internet the day before, more than a few people were singing her praises to all those that missed out on a great Sunday opener.

Next up was a fun surf pop band from Santa Monica, CA named Cayucas. The Gotham Tent attendees were treated to a distinctively West Coast vibe that had us all bobbing our heads and tapping our feet. “East Coast Girl” and “High School Lover” were definite high notes of the show, as well as a new song yet to see a proper release called “Hella,” prior to which lead singer Zach Yudin politely asked the NYC crowd to be cool with its California-based lingo. No one in the audience had a problem with it, as we all joined in its refrain, becoming temporary Californians for around 40 minutes or so.

I stuck around the Gotham Tent to see one of the non-headlining acts I was most excited about, Banks. From the very start, she wowed the fairly large crowd with her powerful R&B-infused music and a mystical stage presence that reminds me of a modern-day Stevie Nicks. Beginning her set with songs like “This Is What It Feels Like” and “Brain”, Banks opened up to the crowd by talking about her own journey to empowerment, reminding the crowd (to resounding applause) not to forget that “every woman is a goddess and every man is a god” before going right in to “Goddess,” which will be the title track of her debut album coming out in September. After sharing with the crowd that festivals make her a little nervous and that she likes to sing cover songs to combat it, Banks gave a wonderful rendition of Aaliyah’s “Are You That Somebody” before ending her set with “Waiting Game.” Banks’s performance at Governors Ball was one of my personal favorites, and I fully expect her popularity to explode by the end of 2014. Catch her if you can.

Already up front at Gotham Tent, I stayed there to catch AlunaGeorge, who I saw briefly during Disclosure’s set the day before. The crowd took on a distinctive “pop concert” vibe to which singer Aluna Francis and producer George Reid’s music fed right into, getting everyone dancing around and singing along. AlunaGeorge pleased us by playing their version of “White Noise,” but their act was not just a one-trick pony as nearly every song was received with a lot of excitement and energy. If you haven’t heard their song “You Know You Like It,” do so ASAP, or after reading this review at the very least.

I finally emerged from the Gotham Tent to head back to the GovBallNYC Stage just in time to catch the beginning of The Head and The Heart’s show. Their folky, Americana sound was a great change of pace for the middle of the afternoon, replacing the pop dancing of earlier shows with some good ol’ foot-stomping and hand-clapping. “Another Story,” off the band’s most recent album, was a very relaxing folk number that set the pace of their show early on, but it wasn’t until the very end of their show that they peaked, which is precisely where it should happen. After some clamoring from the crowd, the band responded by playing “Rivers And Roads,” which was absolutely amazing to hear live. Combining the lyrics, instrumentation, and spot-on harmonies with the emotional connections you can only get from a live performance, “Rivers And Roads” was far and away the best closing number at Governors Ball, striking an emotional cord or two in yours truly. A fantastic show from a band I cannot wait to see again.

In a complete 180 degree turn at the GovBallNYC Stage, Foster The People brought their frenetic and frequent instrument-swapping energy to a massive audience that was clearly waiting for it. Opening with one of my personal favorites “Miss You,” Mark Foster and the lads kept the pedal to the metal mixing in crowd favorites from their debut album Torches with songs from their newest release Supermodel. Playing “Pseudologica Fantastica,” “Best Friend,” and “Coming Of Age” in rapid succession, Foster The People showcased that their newest album is just as great live as their old standbys. The crowd was in rare form for this show, as I had over 20 crowdsurfers go over my head during the set, and when FtP closed with “Don’t Stop (Color On The Walls),” our area became one huge mosh pit. Opining that most of their shows are spectacles nowadays but that this show was much different—in a good way—Foster certainly appreciated our efforts, just as we all appreciated his.

Beginning the wind-down to my Governors Ball experience, I worked my way to the Big Apple Stage to catch Interpol, who started just as the moon was rising right over the stage, fitting perfectly with Paul Banks’ gloomy baritone voice and their classic post-punk/indie rock guitar-driven sound. Although I was a little bummed they didn’t play “Untitled” to open their set (or at all, for that matter), what followed was a wonderful call back to the early to mid-2000’s, full of many of their classic songs including the apropos “NYC.” They also played a few new songs that will be on their upcoming September release El Pintor which we gladly welcomed with open arms and ears. Interpol was the only band I saw during the festival to encore their show, albeit leaving the stage early to come back on to finish the set. They closed with a couple Turn On The Bright Lights classics, the crowd favorite “Stella Was A Diver And She Was Always Down” and the dark and driving “Obstacle 1.” Seeing their live performance was yet another highlight of my weekend.

Closing the evening (and the festival) was Vampire Weekend, a stark contrast to the Axwell & Ingrosso show on the opposite side of the island, but certainly the right move given three full days of being on my feet. This didn’t stop Ezra Koenig from urging us to dance, nor did it stop much of the crowd from doing so, but I felt more comfortable closing the festival from the rear of the audience, allowing myself to come down a little from the weekend that was while still taking in the peppy offerings from each of Vampire Weekend’s three full-length albums. Utilizing all the energy I had left to fully enjoy “A-Punk” in the middle of their set, exhaustion proved to be too much for me, so I began the long walk back to Manhattan while “Ya Hey” drifted ever so subtly in the background. Kudos to the huge Axwell & Ingrosso crowd for digging deep and finishing their festival experience with a flourish, but no matter how our Governors Ball started or finished, NYC couldn’t have asked for much better than we received.