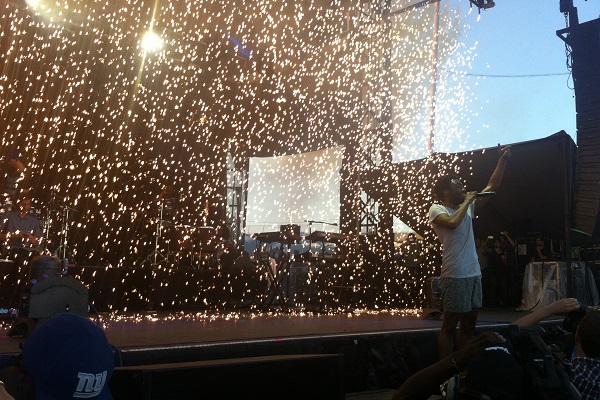 Saturday at Governors Ball brought with it a picturesque, sunny day and another loaded schedule of great musical acts for crowds to enjoy, but I wondered if it would be able to measure up to Friday’s lineup, especially considering the rousing performances by Phoenix and OutKast the night before. Let me start by saying that I hadn’t seen anything yet.

I started at 12:15 yet again by catching the set of LA-based indie pop band Hunter Hunted, who seem to be a staple of American music festivals this year, having previously played SXSW and just playing Bonnaroo this past weekend, with Firefly AND Bunbury yet to go. Bandmates Dan Chang and Michael Garner played a good set of music off of their self-titled EP, but seemed better suited for a more intimate scene like the Gotham Tent rather than the main GovBallNYC Stage. Nonetheless, they pleased the crowd (and especially me) with a wonderful rendition of the Pixies’ “Where Is My Mind?” convincing me that there are bright days ahead for this duo.

I found my way to the Gotham Tent to see The Internet, regrettably knowing very little about the band outside of vocalist Syd Tha Kid and producer Matt Martians’s membership in Odd Future and the super groovy track “Dontcha.” The Internet, led by Syd’s smooth voice and easy-going flow, provided the crowd with wonderful neo-soul music that worked just as well under the tent as it would have in a NYC lounge or setting the mood for a romantic dinner for two. They also showed their edge with “She Dgaf,” with Syd getting most of the crowd to throw their middle fingers in the air corresponding to the song’s refrain. The Internet was regarded very favorably during Governors Ball, as I had several conversations with people who regarded their set as one of their favorites at the festival.

I worked my way back to the GovBallNYC Stage to see PAPA, another LA-based band with an indie rock feel to their sound. Tracks like “If You’re My Girl, Then I’m Your Man” and “Put Me To Work” got the crowd into the show, and lead singer/drummer Darren Weiss gave the audience a rare sight to see a vocalist behind his kit. PAPA is definitely a band I’m keeping an eye on, and after their show at GovBall, I’m queuing up their album Tender Madness for another run-through.

Making my first stop of the day at the Honda Stage, I got a front-row spot to catch yet another Los Angeles-based act, this time the electronic duo Classixx. It was good to bring your dancing shoes for their set, which featured popular tracks like “Holding On” and “All You’re Waiting For,” which saw the latter feature a live vocal appearance by LCD Soundsystem‘s Nancy Whang, who lends her talents to the track on their album Hanging Gardens. Classixx also featured two vocal appearances by D.C. dream wave duo GEMS during their set, which made my day as they are a band I’ve been dying to see for a while.

Classixx’s set was an appropriate warm-up for the next band to hit the Honda Stage, which was English electronic mega-duo Disclosure. An act that seemed more appropriate for the GovBallNYC Stage, especially given the massive crowd, absolutely destroyed their set, leading off the show with “F For You” and promptly moving right into “When A Fire Starts To Burn.” By the time AlunaGeorge stopped by to lend her vocal talents to the hit song “White Noise,” the crowd was in a prime dancing mood. Naturally, they saved the best for last, ending their set with the super popular “Latch,” which caused the crowd to explode with joy. Disclosure mentioned that the GovBall crowd was probably its biggest American crowd ever for a show, which only excited the audience even further.

Faced with my biggest schedule dilemma of the festival, I made the extremely difficult decision to forego seeing The Strokes to keep my front row spot for the next Honda Stage act, Childish Gambino. Whatever uneasy feelings I had for missing The Strokes went away before Childish even stepped on stage, when Andre 3000 decided to take in the show as well, sitting down right in front of me in the media pit. Once Childish Gambino started his set, it was clear that he used his Strokes pairing as fuel to put on a fantastic show, even mentioning so in one of his freestyles during the set. Chance The Rapper came by to put down a verse on “The Worst Guys,” but Childish completely owned the time he had with great stage presence, perfectly delivered lyrics, and a surprising pyrotechnic display. Running the risk of sounding sacrilegious, I was more than glad that I stuck around for Childish Gambino. His is a show I would gladly see if I ever got the opportunity again.

I moved on from the Honda Stage to the Big Apple Stage directly across the way to cool myself down with Spoon, a band I’ve known about for over a decade but never had the chance to see live. However, probably due to too much energy from the previous three shows, I walked around the grounds past the Sleigh Bells show in the Gotham Tent in time to catch a couple songs of their visually stimulating and unrelentingly loud set, most notably “Infinity Guitars.” I quickly found my way back to the Spoon concert, and caught most of their greatest hits, including “The Underdog,” “Don’t You Evah,” and “The Way We Get By,” which gave me instant flashbacks to the TV show The O.C. It was a great change of pace and certainly allowed the audience a chance to catch its breath before heading into the headlining shows for the night.

I ended my Saturday lineup with little regard for my hearing (or my legs) by catching Skrillex, who amped up the audience’s anticipation to 11 by running a five minute countdown on the two jumbotrons on either side of the Honda Stage before beginning an extremely loud show that had the crowd going crazy as Skrillex usually does. He performed his show atop what can only be described as a spaceship, appropriate given the cover of his newest album Recess, and he kept the crowd in a frenzy until the show’s close, delivering the final nail in the coffin of Governors Ball Saturday that had me completely forgetting what happened the day before and most likely got me several years closer to needing hearing aids.