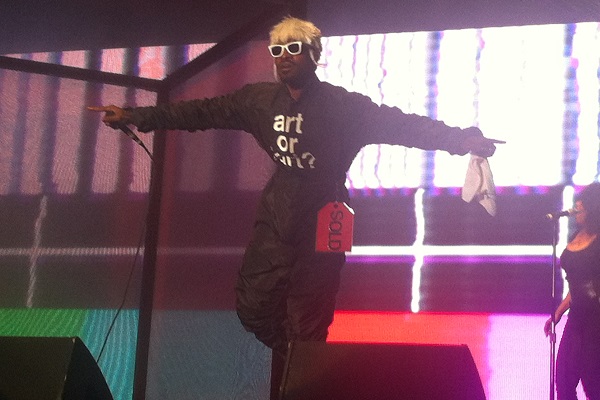 Over the course of three days between June 6th – 8th, NYC celebrated its 4th annual Governors Ball Music Festival on Randall’s Island. Positioned squarely between Manhattan, Queens, and the Bronx, attending Governors Ball is akin to a musical journey, where one arrives each day full of energy and invariably leaves each night physically exhausted from nearly 12 hours of dancing, walking, standing, and then dancing again, all the while being perfectly pleased with the experience.

Blessed with temperatures in the low to mid 80s and clear skies all weekend, Governors Ball boasted a dynamic lineup ranging from folky Americana to straight-up electronic dance, all in all featuring 68 bands/artists. The grounds are deceivingly large given its location on an island, but its size allows for relatively easy navigation from stage to stage (of which there were four), especially considering organizers did a great job eliminating set overlaps, allowing people to enjoy one act fully without experiencing FOMO on another act starting afterwards.

Wanting to maximize my GovBall music experience, I relied heavily on pre-festival prep, packing water and food each day to sustain my energy level and allow for stage campouts without losing valuable crowd locations. For Neat Beet foodies interested in the edible side of the festival, my apologies, but mine was a music early and often extravaganza. This being a three-day festival, I’m splitting my review into individual days, starting with Friday.

Opening Governors Ball in the Gotham Tent was The Chain Gang of 1974, a synthy, indie pop act created by Kamtin Mohager, who fronts the band. Mohager made the most of his half-hour set with his relentless energy that kept our bodies moving and really set the tone of the festival for those who attended the show. Near the end of their set, Mohager played the catchy and upbeat “Sleepwalking”, which was easily the highlight of the show and a special treat for anyone who ever played Grand Theft Auto V.

Minutes after The Chain Gang of 1974 ended their set, Little Daylight kept the synthpop train rolling at the Gotham Tent. Navigating between songs from their EP Tunnel Vision and their upcoming debut LP Hello Memory, which lead singer Nikki Taylor mentioned drops in July, Little Daylight gave the audience plenty of toe-tapping, head-bobbing, sing-along tunes to enjoy, ultimately ending their set with their very catchy first single “Overdose.” Little Daylight is one of several GovBall acts that will give festival goers another chance to catch them at this week’s Firefly Music Festival in Dover, DE., so if you’re attending, I suggest you give them some consideration while putting your lineup together.

After taking some time to walk the grounds to check out all that Governors Ball had in store outside of its music, I found my way to the Honda Stage to catch the Manchester-based The 1975. Their set included crowd favorites “Sex” and “Chocolate”, which ironically yet aptly serve to showcase much of the band’s musical themes. The 1975 reminds me thematically of a more upbeat and fun version of The Neighbourhood, which isn’t meant to slight the latter, but rather to further praise the former. Judging by the attendance at their show, they seem to be making the right moves.

I moved to the Big Apple Stage immediately thereafter to catch Bastille, who have definitely come into their own following their widely successful debut album Bad Blood. It was a packed crowd for their show, which early on included “Things We Lost In The Fire”, a song that was great on their album and even better live. However, being torn between them and Washed Out, who were paired at the same time at the Gotham Tent, I decided to split my time between the two. I was lucky enough to catch Washed Out at the pinnacle of their show, catching songs like “Amor Fati” and “Feel It All Around”, the second of which they played a half-step slower than the album version, creating an even groovier vibe. It might not seem like it when listening to their albums, but their show can easily get a crowd going, and their GovBall outing was no exception.

Deciding to place future crowd location ahead of my original Friday lineup, I made my way to the main GovBallNYC Stage to see Julian Casablancas and the Voidz. It seemed as if the crowd was a little disappointed in the fact that they didn’t recognize much of the music during the set, many songs of which Julian stated would be on an album coming out later this year, but it didn’t keep attendees from enjoying their rock sound, along with scenes of the sci-fi genre-pioneering movie classic Metropolis playing behind the band. They did manage to play “Instant Crush” early in their set, which the crowd gladly appreciated.

Staying put and squeezing as close to the stage as possible, I was very excited to see Phoenix play live for the first time. I postulated aloud to those around me prior to the show that their music seems tailor-made for a live show, and much to the huge crowd’s appreciation, it proved to be true. Playing songs that spanned their entire discography, including the enthralling “Lisztomania” and recent single “Trying To Be Cool,” Phoenix deftly laid claim to easily the best show of the festival up to that point (more on that in a bit), and lead singer Thomas Mars enjoyed himself so much, he found his way into the crowd at the end of the show and stood atop several lucky concert-goers before crowdsurfing his way back to the stage to close the set.

Continuing to maneuver toward the front of the GovBallNYC Stage crowd, I was rewarded with an up close and personal vantage point of the Friday night headliner OutKast, who wasted no time wresting away the “best show of the day” award from Phoenix, opening with a blast with “B.O.B.” OutKast too played songs from all of their albums except for Idlewild, including several appearances by Sleepy Brown, a stage-stealing glimpse of Janelle Monae shaking it like a Polaroid picture during “Hey Ya,” and Killer Mike stopping by to help close the show with “The Whole World.” Big Boi and Andre 3000 haven’t lost a beat in their seven years away from the game as a hip-hop duo, and the Governors Ball crowd were the happy recipients of a show which proved that after twenty years, OutKast can still bring it.

Tagged: bastille, Governors Ball, julian casablancas and the voidz, little daylight, outkast, phoenix, the 1975, the chain gang of 1974, washed out