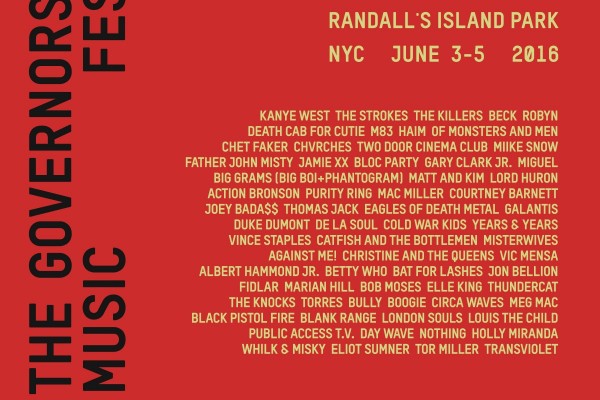 The Governors Ball Music Festival definitely had an interesting 2015. Organizers had the lofty challenge of attempting to duplicate what some called the festival of the year in 2014, and while their efforts did not go unappreciated, it still didn’t have the punch that came with the stacked lineup the year prior (Run The Jewels, Banks, and The Internet were near the bottom of the 2014 lineup announcement, to give you an idea). Then, this past fall, rumors abounded that AEG, the company that promotes Coachella, was planning their own music festival in Queens (Panorama Music Festival) just two weeks after the already scheduled Governors Ball 2016. After some petitioning to Mayor Bill de Blasio to reject AEG’s proposal AND the announcement that Madison Square Garden was looking to do their own festival in June of this year–giving NYC a whopping three festivals in one month–Panorama decided to move their festival to an as of yet unannounced date, with no word yet on MSG’s proposed fest.

So here we are, in 2016, with Governors Ball still the (not so) little local festival that could, but given all of the drama this past fall, you’d expect them to have a little drop-off with this year’s lineup, right? Well, turns out if that was your opinion, you were dead wrong. Festival organizers stunned music fans (yours truly among them) with a dynamite lineup, possibly a not-so-subtle middle finger directed at those companies attempting to muscle them out of the way. While some critics will look at it and frustratingly point out the returning performers, especially among the headliners (Kanye West, 2013; The Strokes, 2014; Beck, 2012), I choose to be positive and believe we all have much to look forward to.

Here’s just a few bands and artists to watch out for at the 6th annual Governors Ball Music Festival:

The Killers – I unfortunately missed The Killers at Firefly 2015 this past summer, as they were easily one of the more highly anticipated acts on my list for the festival, so I plan on taking a musical mulligan and making them an absolute priority this year. It’s especially exciting for New Yorkers, as they have not played in NYC since 2013. Hopefully they’ll finally answer the question, “Are we human, or are we dancer?” [ed. It might be rhetorical]

Chet Faker – This Australian electronic musician has consistently been churning out fantastic music since his excellent 2012 EP, Thinking In Textures. Governors Ball has historically done very well with including upbeat, danceable music at their festivals, but they also find ways to sneak in performers who can slow things down and still entertain the masses, and Chet Faker’s downtempo electronica/PBR&B stylings will most certainly fit that category this year.

Jamie xx – I’ll freely admit that one album that I really had a hard time not fitting into my favorite 2015 albums list was the Grammy-nominated dance album In Colour by Jamie xx. (Our Beet Box Radio host Matt Esposito did not make the same mistake, to his credit.) He is clearly adept at production, whether he’s with his band The xx, or stepping out on his own, and the Governors Ball faithful will be in for an absolute delight during his set, which I can only hope is at night to add to the effect.

Bloc Party – One of the returning performers on this lineup (they previously played in 2013), Bloc Party has been one of my bucket list concerts for a long time now, so it will clearly be a can’t-miss set on my end. They’ve recently undergone some lineup changes at drums and bass, and are also releasing their first album in four years later this month with Hymns, so we can definitely expect a new-look band with new music, along with some of their Silent Alarm and A Weekend In The City classics.

Big Grams – What do you get when you combine the electronic duo Phantogram with the Speakerboxxx half of the iconic hip-hop duo Outkast, Big Boi? For starters, you get performers who played at the first two Governors Ball festivals before it became the three-day extravaganza it is today, but you also get the collaboration project Big Grams, who dropped a really great self-titled EP near the end of 2015. Including guest appearances from Governors Ball 2014 alums Run The Jewels and Skrillex, it’s a musical experiment that has struck oil, and as a result, Big Grams are guaranteed to impress this summer.

Marian Hill – One of the bands whose album made it to my favorite 2015 albums list, Marian Hill will have either released or be close to releasing their first full-length album, Sway Cray, by the time we get to Governors Ball in June, which means some new music to go with what the great music they’ve already begun to create. I did see them at Firefly this past year, but they immediately followed Paul McCartney’s epic two-plus hour set, and started at 1:15 AM, so I’m looking forward to being less distracted (and exhausted) for their show this time around.

Eliot Sumner – Another artist I caught last year (they kicked off our Boston-based ‘Beet coverage) Eliot Sumner was extremely impressive with their 10-song opening set. Sumner, who is the child of The Police frontman Sting, is also releasing a debut full-length album later this month, Information, which might just be one of the breakout releases of the year if it sounds anything like what I heard in September. Relegated to the bottom line of the of lineup announcement, Sumner might be one of the biggest surprises of the festival, so don’t be one of the people who misses out but tells everyone that they went to it anyway. No one likes that person.

There are still so many more artists/bands who could be featured here based on this lineup, but I’ll simply include ten of them below as honorable mentions. In full disclosure, this festival looked so amazing at first glance, I bought my ticket 10 minutes after I saw the announcement on Friday. It’s an impulse purchase that is certain to pay dividends for me and the thousands of Governors Ball congregants at Randall’s Island, June 3rd through the 5th, 2016.