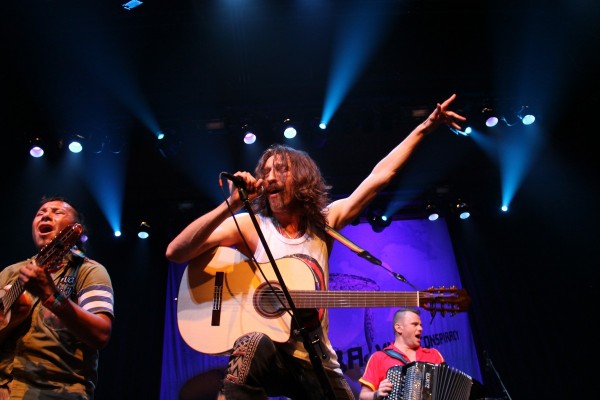 The lights drop. Screams erupt from a dark room. The stage illuminates neon with a giant Slingshot sign toting the words “Pura Vida Conspiracy” and a 4 piece band slams on stage in an eclectic mix of drums, piano, guitar and melodic vocals. This is the opening act of the night, Man Man, the Philadelphia based experimental group fronted by Honus Honus (Ryan Kattner) who serves as vocals, piano, ukulele, organ, and guitar. Other members of this whimsically fun band include: Pow Pow (Chris Powell) on percussion and loops, Shono (Bryan Murphy) on trumpet, back up vocals, guitar, and Brown Sugar (Adam Schatz) on Saxophone, keyboard, percussion and vocals.

The band demands to be seen and heard with Honus Honus parading around on stage on a great white fur coat shouting melodies to the emphatic audience. A plethora of unique instruments come together to form incredible songs. When was the last time you can say you saw a marimba, a melodica, a Chinese funeral horn, a xylophone AND audience members heads as percussive instruments used in an active performance? Nope, didn’t think so. Playing hits off their most current album On Oni Pond with the most popular “Head On (Hold onto Your Heart)” creating an extreme chorus from the amped up audience.

The main act of the evening, Gogol Bordello, took stage after Man Man, to a not-even-tired yet crowd. The sounds coming from the audience were almost deafening and awesome in its enthusiasm for their theatrical front-man, Eugene Hutz. Formed in 1999 and mainly based in the Lower East Side of Manhattan, NY the self proclaimed “Gypsy Punk” pulls influences from its multi-ethnic members and persistent travels. Even though Hutz himself comes from Ukraine on the waves following the nuclear disaster of Chernobyl, the rest of the band consists of members from all over the world such as Sergey Ryabstev from Russia on electric violin, Thomas Gobena on bass from Ethiopia, Pedro Erazo on percussion and ukulele from Ecuador, Elizabeth Sun of China/Scotland on backup vocals/percussion/general dance, Pasha Newmer of Belarus on accordion, Oliver Charles of the USA on drums, and Michael Ward on second guitar/vocals of the USA.

Gogol Bordello is known for its extremely spirited and theatrical shows. Members stomp their feet on stage, bang on giant glittery drums, while Elizabeth Sun provides colorful dancing amongst the gypsy-dub beats put down by Hutz and company. Bodies rise from the floor in the audience in a wave of crowd surfers in time to the rebellious cacophony of Pura Vida tracks and older songs. Opening with the first track on Pura Vida, “We Rise Again” the crowd just goes absolutely wild. Other tracks played from their most current album included: “Malandrino” and “Dig Deep Enough”. The well known “Start Wearing Purple” from their 2005 album, Gypsy Punk: Underdog World Strike, was a huge hit, played towards the end of their almost 1.5 hour long set.

11 o’clock came near, signaling the end of a truly epic performance. Gogol Bordello thanks the audience and exits the stage much to the extreme dismay of the audience. It’s however, not in Hutz’s fashion to leave his fans hanging miserably. They come parading back out onto stage for an extreme encore performance including songs ‘Think Locally, Fuck Globally” and “Alcohol”.

What makes their performances so incredible is the “Don’t Give a Shit” attitude the band portrays and the messages they spread through their songs, that even though we all come from different backgrounds, those serve just as masks to our true selves. Their music dives beyond the masks to expose humanity at its most primal and infectious form. It’s unapologetic and awesome.