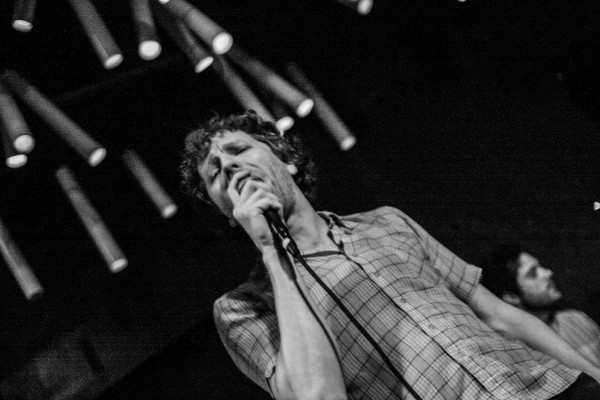 If getting whipped in the face with a sweaty microphone cable is your idea of a good time, than !!! (chk chk chk) live is the place to be. The dance punk outfit has been kicking it now for nearly twenty years and the raucous live show they offer is one that should be returned to as oft as possible. This round, they played a one-off at Glasslands, bringing an unmatched level of energy to the venue despite a set primarily focused on new material.

Brooklyn duo Eaters (Bob Jones and Jonathan Schenke) scored the opening slot for the gig. They offered a krauty and funky interpretation of electronica from their self-titled debut album earlier this year. However, it rarely packed the punch needed to juice the crowd up adequately for !!!. They did have an interesting array of gadgets and lights, but they felt more like a distraction given the low energy output.

Being front row for !!! and holding a camera proved a risky endeavor as the rhythms took hold of the audience. Rather then retreat my position, I chose to abbreviate the gallery to join them. It wasn’t long at all before vocalist Nic Offer was off the stage creating chaos among us, with a rough and tumble dance party formed in his wake. The new songs debuted to the crowd were well received, if you measure by the audience’s sweat and antics. The band is following up this gig with a short tour to continue testing new material, which won’t bring them back here for the time being.