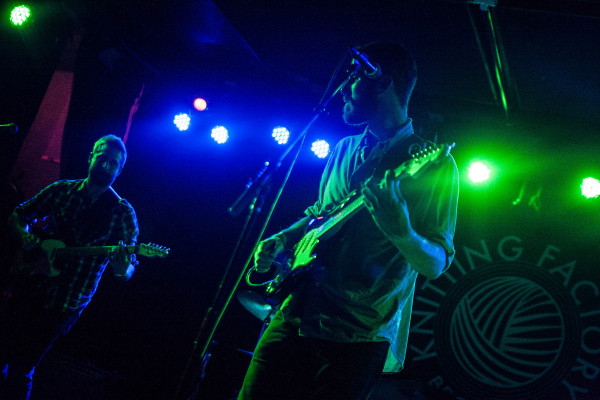 Brooklyn folk band Glass Elephant, who we caught back in June, released a self-titled EP last week and played a show at Knitting Factory in support of it. The four tracks that comprise Glass Elephant continue their earnest take at folk music, spearheaded by a new single, “Toledo“. However, those songs, plus the older ones from Atlantic we heard tonight, seemed to be played with an edge this time. Their frontman, Russ Flynn, seemed cynical about the EP’s prospects noting that no physical copies were available and joking that it could be streamed for pennies online.

That kind of talk is rather uncharismatic and left me feeling rather burned as I came out to photograph them specifically. What kind of release show doesn’t have the record on sale? A thriving ecosystem exists all around me in Bushwick for used vinyl, and I frequently see new records championed as talismans of a fan’s adoration. Glass Elephant really needs to figure out the marketing, because the songwriting and musicianship is there.

Fortunately, I found a bright spot tonight with Wild Leaves, a five piece from around town with a more upbeat and bubbly mood to them. With roaring vocal harmonies and jams propping up their folk sound, it was hard not to crack a smile. The group just put out an EP themselves, Hello Sunlight, and are fairly active in support of it, with their next gig back here at Knitting Factory on Dec 7th.

Andrew Cedermark also was an interesting act. The guitarist and singer, backed by a full band and formerly part of Titus Andronicus, put out an album last year, Home Life. The record definitely leans more towards an indie rock sound in the realm of warm and nostalgic.

We also saw the curious singer-songwriter Nathan Xander. Armed with an acoustic guitar and harmonica, he opened the show with a short set. He also sprung back up later on, dancing on stage with Wild Leaves and shaking the tambourine like a boss. He’s busy with a litany of upcoming gigs around the area: 11/23 @ Palisades, 12/4 @ Secret Project Robot, & 12/6 @ The Bitter End.