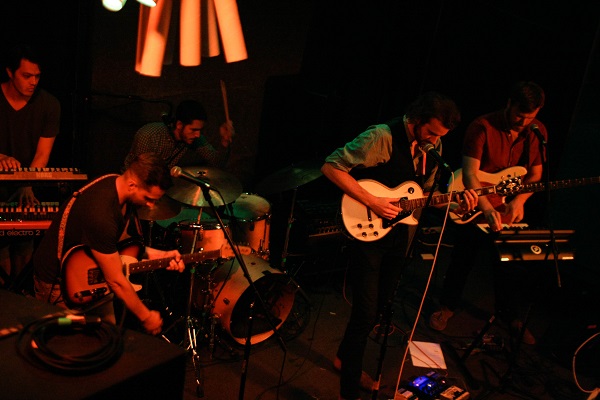 Glass Elephant are a Brooklyn rock band who put out a solemn debut album last year, Atlantic. The group’s downtempo, emotional riffs and soft spoken lyrics are their general medium for conveying their sound and catching my attention. It turns out that this was their first NY show here this year, as they’ve been at work on a new EP. The songs from it comprised about half their set and melded in well with their current material. The band was five members live, adding a dedicated keyboardist to capture some more atmospheric moments.

The supporting acts tonight couldn’t have made for a haphazard combination, though that’s got naught to do with their own individual merits. Boulevards, who I caught first, is a charismatic hiphop artist. It takes a lot of guts to go up as an opener to the small audience present tonight and have them dance and yell your unfamiliar lyrics, but he pulled it off. If he gets the renown he’s seeking, I’m confident he’ll be able to handle a crowd orders of magnitude larger. He’s got the musical foundation with his DJ support and slick dance moves. Its all encapsulated in his debut EP, Ackrylic City.

I also witnessed We Are Temporary. A solo project by Mark Roberts, it is an adventure into EDM’s darker side. I don’t really jive to this genre often, and his music was no exception, but the emotion and musicianship was convincing. Squirming between two keyboards and shouting despairing lyrics, it was striking and unpleasant. Perhaps, that’s the real goal here though. His debut EP, Afterthoughts, appeared last year, and tonight made for his first live performance.