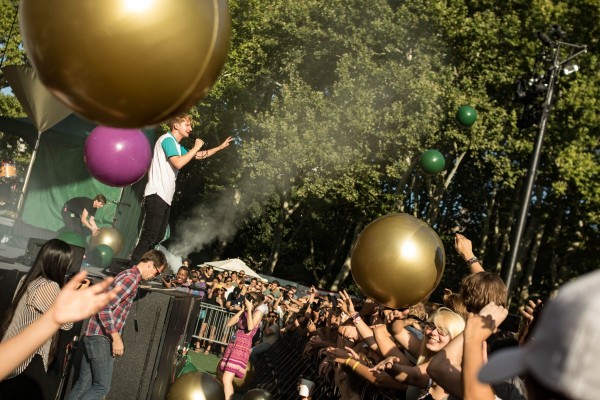 The weather was sunny and perfect last Sunday afternoon for a free Summerstage concert at Central Park’s Rumsey Playfield, headlined by Neat Beet faves Glass Animals. Having recently seen their act at Firefly Music Festival earlier this summer, I was inspired to catch them once more in the great outdoors, a place where their music really takes flight.

Now a year removed from the debut of their first album Zaba, it appears that Glass Animals popularity continues to grow from their US debut, as evidenced by the maximum capacity crowd which filled the space over an hour before the band took the stage. Dave Bayley and his psychedelic quartet brought the “peanut butter vibes” in a big way, energizing the crowd with synthetic beats and an engaging stage presence that serves to enhance the experience.

Some of the highlights of their set included “Gooey,” which saw the inclusion of giant inflatable beach balls being bounced throughout the crowd; “Hazey,” where frequent tour mate Rome Fortune provided guest vocals and a rap verse; and brand new track “Gold Lime,” which is sort of a double cover song, taking the melody and lyrics of the Yeah Yeah Yeahs “Gold Lion” and adding samples from Erykah Badu’s “The Healer.” It was no secret that they were aiming to perform it during their Summerstage appearance, and it did not disappoint.

Glass Animals ended with “Wyrd,” where Bayley appropriately opined “So my friend, our time is done,” but they catered to the enthusiastic crowd by coming back on stage for two more offerings. They played their cover of Kanye West’s “Love Lockdown,” which Bayley dedicated to his mother (who was at the show), thanking her for putting his first guitar in his hands, and ended the show for good with “Pools,” which closed the show with a flourish. Glass Animals are a wonderful live act, and will be returning to the area later this year with shows at Terminal 5 and House of Blues Boston on October 15th and 17th, respectively.

Taking the stage prior to Glass Animals was multi-instrumentalist, DJ, and music producer Taylor McFerrin, who with the help of drummer Marcus Gilmore, set the appropriate tone leading up to the headlining act. McFerrin (son of Bobby McFerrin of “Don’t Worry Be Happy” fame) performed an eclectic brand of music ranging from downtempo, ambient, and neo-soul influences, to even showing off his beatboxing chops. His set was very relaxed, even as he and Gilmore experimented with songs from McFerrin’s album Early Riser, going so far as to build a beat from scratch during the set.

For those of us in the audience who got there early, we were treated to some “extreme” dance battles courtesy of Brooklyn’s BattleFest League Dancers. Each of the four dancers present had their own unique styles, many of which were reminiscent of what you see in the video for Glass Animals’ “Hazey.” The dancing was very entertaining to see matched up against each other, and it was definitely a enjoyable way to kick off the afternoon.

One of the most memorable shows I've been to this year, I'd wager. An impressive achievement for being midday! Tempted for T5 now :)