Glass Animals Made Their US Debut, Announce First Album Zaba 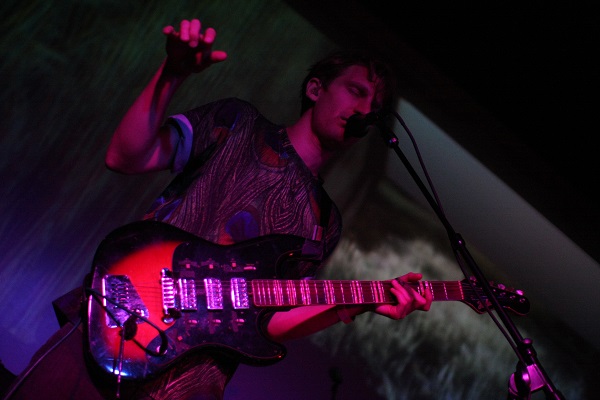 Channelling the smoothest side of psychedelic pop is Glass Animals, a slick new four piece from across the pond. The band, who just released a sick stop-motion video for “Pools” this week, are poised for a breakout. They’ve been signed to Capitol’s Harvest Records label, which has been strengthening lately with strong signings from other up and comers we covered this year like Young and Sick and Arthur Beatrice. Glass Animals’ debut record has also been announced, Zaba, which will land June 9th; the band themselves will return on July 7th at Bowery Ballroom with Tei Shi opening, which means “Holiest” off the Gooey EP should also be on the set list.

Glass Animals are a four piece live and in recording. The group mostly dabble with synthesizers, but do include percussion and strings in their live presentation. Frontman Dave Bayley is convincing; he has the spirit of his band’s velvety beats imprinted on his movements and actions. Their short set was a hodgepodge of the individual tracks they’ve released, including slick singles “Gooey” and “Psylla“. Glass Animals heavy focus on the psychedelic in their artwork leads me to expect a more visual component in their live gigs, but for tonight they were bereft of any of their own.

This performance was part of a series called Late Bloomers, which may be at fault for the bizarre and distracting visuals which looped during the entirety of the event. Fascinator, one of the opening bands, flourished under it. The group of weirdos garbed themselves in netted masks and hats with googly eyes. They also were equipped with instruments that look like game controllers to complete the bizarre, but ultimately compelling sight. The group’s psychedelia-electronica fusion is available on two EPs from their Bandcamp.

People Get Ready, of Brooklyn, had the penultimate slot of the night. The four piece rock group’s energy was definitely highest on the night. I especially loved their lead singer’s emphatic movements, which almost felt like a game of charades at times. The whole package really makes you want to dance and shout for joy. They are preparing to release their second album, Physiques, via BRASSLAND on June 24th.