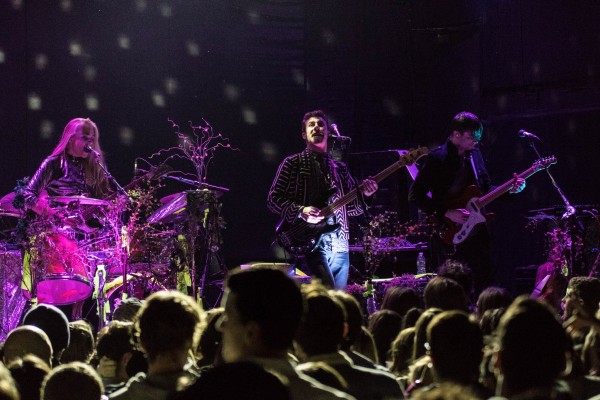 Louisana’s Givers are well known for a buoyant, energetic style of rock. The five-piece emerged from a three year long period of dormancy in Autumn with New Kingdom [via Glassnote], their first release since their bubbly debut four years past, In Light. It was my first time seeing them since they toured with Gotye in 2012, which was their last show here until just recently. The band’s effusive, Southern charm and warmth shines on stage, highlighting perhaps in moments when they threw blueberries into the audience and shared shots of Jameson with the front row. This show left no doubts in me that they’re now confident headliners and the comfortable environment they cultivate is one I would return to gladly.

Unfortunately, New Kingdom hasn’t gotten quite the traction that In Light did. The sound has evolved into what feels like a departure from their beginnings, and it didn’t catch with me listening the first time. The album succeeds at least in extending their breadth of live material and fares well on stage. Despite it, I look forward to seeing how they continue their journey in the meanwhile or if the record even winds up dulling their momentum.

Doe Paoro, supporting Givers on tour, was a factor in coming out. The LA-based singer, who recently released her ANTI- debut, After, caught my eyes and ears with anthemic tracks like “Hypotheticals” and “Nostalgia“. The translation to live was solid, with percussion and guitar augmenting her synthpop compositions and vocals. The audience and I got a kick out of her experimentations with her vocoder. She joined Givers for their finale, the lead single from New Kingdom, “Record High, Record Low“.

Apologies to Sonnymoon, whose opening performance I missed.