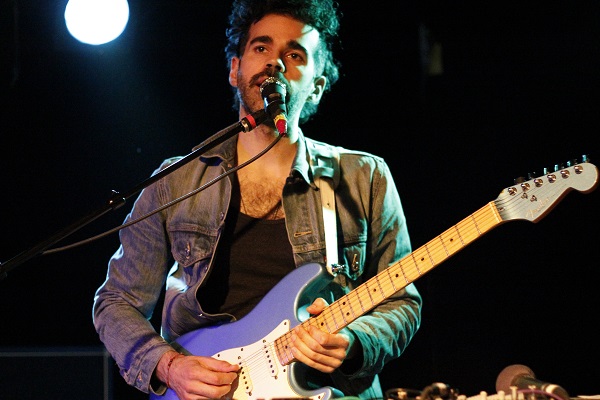 Geographer and Hooray For Earth brought the west  and east coasts together in Connecticut for a Sunday night of smart electronic music last weekend. The Ballroom at The Outer Space in Hamden, CT played host to some sweet harmonies and some unconventional instrumentals.

After performing at home in New York, four-piece Hooray For Earth made the trip to Connecticut to share their experimental electronic rock. They touched on their 2011 full length release, True Loves, and also made sure to include their most recent single, “Keys“, for good measure. It’s definitely their catchiest, most memorable offering thus far. It’s pulsating percussion and haunting, harmonic vocal chorus from Noel Heroux and Jessica Zambri made it the highlight of their set and it could see some commercial success in the near future.

San Francisco’s Geographer shared plenty of tracks with us, new and old. Vocalist/guitarist, Michael Deni, made it known that some of the evening’s material was unreleased and that the band is due to officially put out some new music. I also need to point out that Nathan Blaz on electric cello adds a crazy amount of depth to their sound. In some tracks, it would simply provide the backing melody needed to tie all the instrumental parts together. Within others, it would take command of the entire stage. And it never gets old to watch a cellist perform as part of an electronic group.

The set covered the meat of their 2010 EP Animal Shapes and 2012’s full length album, Myth. They opened and closed strong with “Lover’s Game” and “Blinders”. It was a mellow, but dancey affair, one that included some dimming of the lights to set the tone for several tracks. I was intrigued by Geographer’s unreleased tunes, and hopefully this means they’ll pop back up on the new music radar later in 2014.

In addition to the photos below, have a look at my full set here.