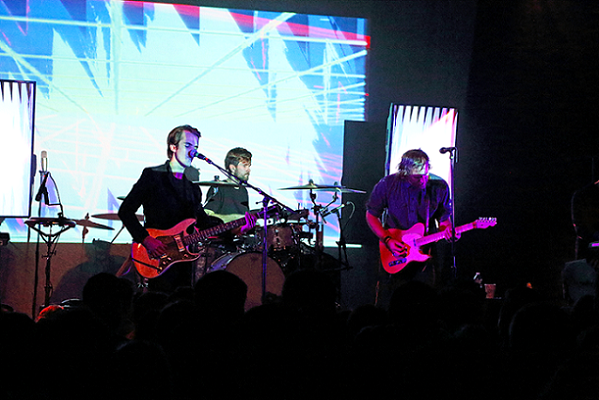 As soon as I saw that Gardens & Villa would be stopping at Brooklyn’s Music Hall of Williamsburg, I knew that we would be in for an eclectic showing. Joined by Waterstrider, Diane Coffee, the side project of Foxygen’s Shaun Fleming, we received just that. Fleming offered up some eccentric energy and Gardens & Villa brought things back down to earth with some genre blending that appealed to synth rock fans and flute players alike.

Waterstrider, a five-piece Californian band, started things off with a smooth set filled with experimental and artsy vibes. With some unexpected guitar distortion and an appearance from a toy-like xylophone, I enjoyed their sound. They simply suffered from being upstaged by the bands that followed.

It was intriguing to get the chance to Foxygen drummer Shaun Fleming escape the confines of his drum set. He heads up Diane Coffee, a side project of his that has an interesting feel to it. Dressed in all white and glittery kicks, Fleming appeared angelic on stage with some superb showmanship while helping ring Diane Coffee’s  My Friend Fish LP to life. What you got, musically, from the band was a mood that would swing from bluesy baptism to bluesy funeral, chock full preachy vocals. I could only imaging dying in a freak accident and being greeted by Diane Coffee in the afterlife, pouring out their souls apologetically.

The billed headliner for the evening, Gardens & Villa, then showed off their ambitious indie synth pop/rock style. Hailing from Santa Barbara, CA, the group combines your basic rock elements, all the while incorporating synthesizers and noise. Vocalist Chris Lynch even features the flute in an assortment of tracks. On the heels of the release of their sophomore album Dunes, much of the album was covered, as well as songs from their self-titled debut LP.

Naturally, whenever Lynch dug into his bag of wood flutes, the band was simply captivating. “Domino”, “Chrysanthemums”, and “Orange Blossom” were all beneficiaries of jazzy undertones that would have done Ron Burgundy proud. The dynamic nature of the band was evident as they would jump from a jazz rhythm to synth heavy tracks like “Colony Glen”. “Echosassy” was a standout track as well and an excellent choice for the encore as we heard Gardens & Villa channel haunting old school alternative sounds .

For the time being, Gardens & Villa are touring North America. Before they head overseas for a bit, they’ll make a stop at South By Southwest where they will hope to garner some significant attention.

Hymn
Never Lonely
When It’s Known
WWWwoman
Gov. T
All The Young Girls
Soon to Be, Won’t to Be
Green
Tale Of A Dead Dog
Eat Your Love (With Sriracha)
New Years