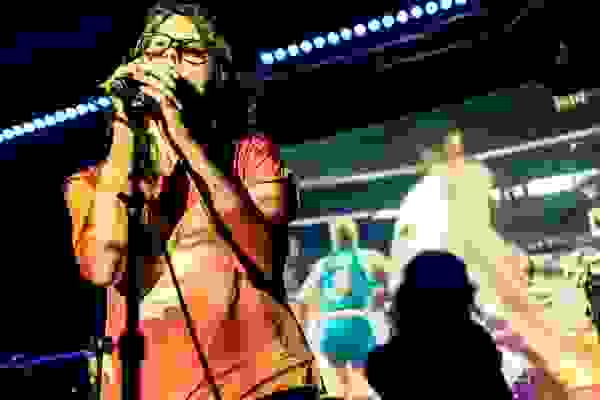 Adherents to the world of dreamy, chilled out pop music should start paying Future of What some heed. Almost a year ago, they left a solid impression when we first glanced upon them by chance at the now defunct Glasslands. Last month however, they resurfaced with a stellar debut record in tow. It is called Pro Dreams, and the band organized a headlining gig at Baby’s All Right to play us it in full.

Blair Gimma (vox), Max Kotelchuck (synth), and Sam Axelrod (bass) comprise Future of What. Live, they played to visuals that ran the gamut from hoop dreams to pixel cityscapes (via Alex Reeves). Blair’s detached and calm presence on stage is an ace compliment to the moody, soothing sounds of Pro Dreams. From tonight, I was left convinced of their sincerity and enthusiastic for their next steps.

Openers Oppi and Buck were each brand new acts that cut their respective teeth at this show. Oppi, an electronic producer and solo keyboardist/vocalist live, set us up with a slow cooking R&B vibe. Buck, a singing-songwriting duo helmed by Sam “Buck” Rosen, followed replete with plenty of ‘rompers’ and a few ‘stompers’. Both were very charismatic performers.

Tagged: babys all right, buck, future of what, oppi