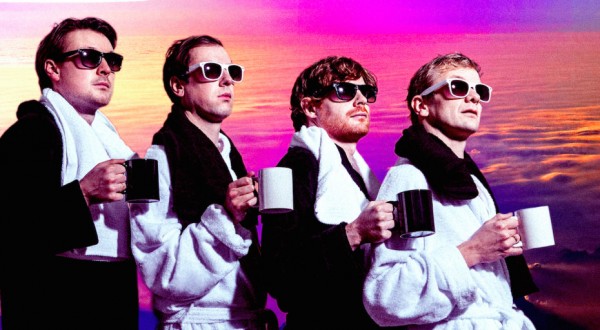 The United Kingdom is constantly generating music of major interest to us at Neat Beet. Look below for a Spotify playlist and intel on each artist’s activities, release schedule and any live dates planned. This playlist features a good balance of returning veterans and nascent acts.

Blur are back! Today saw the release of “Lonesome Street,” the lead track from their new record, The Magic Whip, out April 28th on Parlophone. It’s their first studio album in over a decade, and so far it feels really on point.

Django Django are prepping their second LP, Born Under Saturn (Ribbon Music) and recently revealed its second single, “Reflections.” This band’s 2012 debut was one of my absolute favorites from that year, and I’m very excited to see what’s up next. The album is out May 5th, and they’ll be here July 28th at Webster Hall for a live gig we’re quite excited about.

HÆLOS are an interesting new project that started outputting music last year. It’s more of that smart, sexy, and electronic-leaning pop that’s been a very popular trend lately. I have very high expectations for the live show and debut album, whenever that may come.

It’s been a while since we heard The Go! Team in action. Four years have elapsed, but their fourth album is coming out tomorrow. “Blowtorch” is emblematic of their slightly nutty and oft high energy output.

Electronic producer SOHN has a new track, “Carry Me Home,” created for the soundtrack of that Insurgent movie currently in theaters. It could be right at home as a B side from last April’s Tremors, which was a solid work of electronica end to end.

Cosmo Sheldrake, a zany multi-multi-instrumentalist, is a favorite of ours for his odd pop tunes. He graced Beet Box Radio with “Moss” last year and will be returning to it soon with the extended version of “Rich.” His first EP, Pelicans We, is out on April 6th via Transgressive Records.

Years & Years are returning to NYC on the 31st to reprise a canceled performance at LPR, which was one of Juno’s victims. The indie pop band is picking up steam very quickly in advance of their 6/22 release for their debut, Communion. “Worship” is the latest track to have been revealed.

Ghastly things are afoot with “Haunter” from London four piece Gengahr. I’m really digging the mellow & atmospheric vibes in their recently released debut EP, She’s a Witch, also on Transgressive Records. They just were at SXSW.

The Cribs released For All My Sisters today after playing a busy three night residency here two weeks past. “Pink Snow” is the longest track The Cribs have ever released and closes out both the record and this playlist. For All My Sisters is out on Arts & Crafts and Sony, and is their first album off their longtime Wichita label. It’s a great release for anyone who likes their pop music with a little bit of an edge.