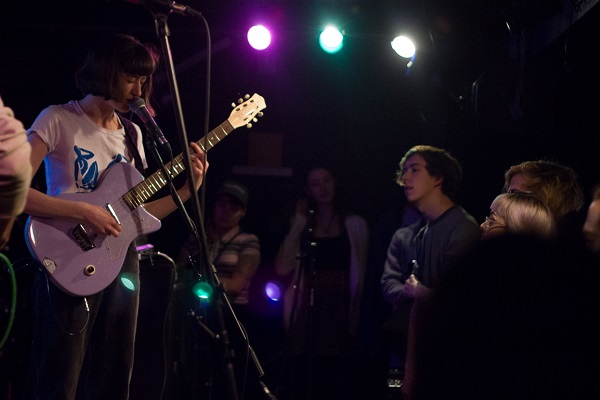 When the celestial bodies align, you can see a band called Frankie Cosmos…at a venue called The Space. Only during the rarest of alignments can you see bands called cool dad and All Dogs at the same time. Dads. Dogs. Space. Manic Productions is watching my dreams.

Local two-piece cool dad opened the night. They drew from their eponymous album, released earlier this month on Bandcamp. I thought their set was a little rough around the edges, perhaps a little thin due to their minimalism, but it was fun and oddly confident.

From the distant and mysterious Columbus, Ohio, All Dogs played their very first show in Hamden to a warm welcome. They’re fronted by Maryn Jones of Saintseneca, another Ohio-based indie act that frequents The Space and other venues in the northeast corridor. It’s always lovely to see Saintseneca play (their June show featured CT locals 10,000 Blades), and it’s refreshing to see Maryn’s familiar face playing unfamiliar music. All Dogs self-released a full-length in late August this year.

Last but not least. Frankie Cosmos is Greta Kline, a New York City native. After self-releasing just under forty – yeah, forty – collections of lo-fi pop music through her Bandcamp, varying hugely in production quality and length, she and Aaron Maine of Porches (in which Kline plays bass and sings) put out Zentropy through Double Double Whammy. This LP netted her significant attention and acclaim from  music critics. Now, Aaron’s brother David plays bass in Frankie Cosmos with Luke Pyenson on drums. This was the very first show of their tour, which will culminate in two shows at Webster Hall in NYC. Both Porches. and Frankie Cosmos are products of the ever-expanding music scene at SUNY Purchase.

Monday night’s show was one of the single most bubbly and reverent concert atmospheres I’ve ever indulged in, behind the sit-on-the-floor-and-sing-along nursery rhyme feeling of an Owen show. An unusual amount of first-time visitors to The Space (they point at the string lights and license plates adorning the ceiling and whisper “but it’s so small!“) sat in little clusters on the floor after All Dogs, chatting and mingling with the frequent fliers and members of the bands.

And then Frankie Cosmos played an assortment of music to a voraciously polite audience, including tracks off Zentropy, their entire post-Zentropy EP, Fit Me In, and a song they “never get to play because people are always so loud” – “Too Dark”. A girl in the audience complimented Kline’s socks – yellow and black checkers – and she took off her shoes to show that from the ankle down the socks were patterned after a pair of Converse. She played the rest of the set in her sneaker-socks. “You guys are the quietest and most respectful audience I’ve ever played to,” said David Maine. Kline loved the crowd too, saying “This is literally the coolest show ever. This is like the most perfect crowd…I really mean it, it’s really nice to feel respected on stage…it’s just true. The tour can only get worse.”

Frankie Cosmos loved the crowd and we loved them too.

Special thanks to Judge Russell for recording the setlist!