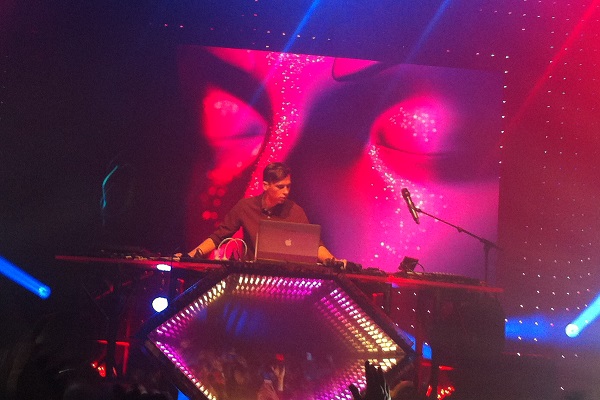 The music world is currently being dominated by a multitude of artists/bands from the UK, but Australia is making its own popularity surge as of late, with artists like Sia, Iggy Azalea, and 5 Seconds of Summer all making significant splashes into the 2014 music scene. Another Aussie musician who fits perfectly into this trend is Flume, who recently played a sold-out, 3-day stay at Terminal 5.

Famously beginning his foray into music production during his early teens with a CD from a box of cereal, Flume (born Harley Streten) has since came into his own creating beats that would get any party started. I caught the second of Flume’s three shows at T5, and you know you’ve hit the mainstream as an electronic musician when the people in attendance look less like a regular NYC crowd and more like a cross between a high school senior class trip and a costume party where the goal is to “dress less.” Being in the middle of that kind of crowd for someone who is juuuuust a bit older than that can be a little strange, but such is the current state of affairs for popular electronic music and such was the case for this highly anticipated Flume show.

Having seen the electronic mega-duo Disclosure at the same venue six months earlier, I was curious as to how Flume’s show would compare, and he absolutely did not disappoint. He kicked off his show with the excellent track “Sleepless,” which definitely started the party for me, and seemed to do the trick for the rest of the crowd as well. From there, Flume blew our collective minds for an hour and a half with a constant stream of dance music which was mixed and transitioned perfectly, giving us no chance to catch our breath from one track to the next. Frankly, we preferred it that way, losing ourselves to features like “Insane,” a track Flume admitted was his favorite on his self-titled album, “On Top,” which features lyrics by rapper T. Shirt, and his remix of Disclosure’s “You & Me,” which promptly sent those of us on the dance floor into a frenzy.

Peppering in other golden nuggets such as his remix of Lorde‘s “Tennis Court” (which unfortunately might be the only song some in the crowd had heard of Flume prior to the show) and his collaborative effort with fellow Future Classic artist Chet Faker titled “Drop The Game”, Flume provided us with a hard-hitting, relentless dance party that we won’t soon forget. He might not have the name recognition of other electronic artists (see: Avicii; Harris, Calvin), but the talent is undeniable. Flume is well-worth catching, and if his Terminal 5 residency was any indication, just make sure to buy your tickets early, as he is quickly becoming a household name.

Opening the show was DJ Noah Breakfast who gave us an entertaining and healthy base with which to begin our evening, and rapper GoldLink, who brought his frenetic energy to whet our appetites for what was to come. GoldLink was especially memorable, periodically sampling 90’s R&B and early- to mid-2000’s pop tracks into his music, which is a surefire way to get an audience up on their feet. And yet, he doesn’t rely solely on that technique as other up-and-comers might, as he combines within that a non-stop flow and a unique musical style all his own. Keep your eyes peeled for him in the future.