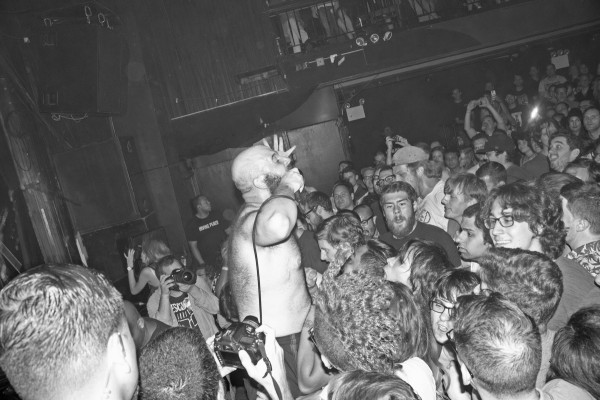 The 10 year anniversary of indie rock show guide OhMyRockness slotted Fucked Up to play Irving Plaza on the opening night of their celebrations. Other acts during this four show festival blowout included Panda Bear and Black Lips. Fucked Up’s latest album Glass Boys continues to push the envelope of what it means to play hardcore music. Sonically they are huge, but they treat each live performance like an intimate basement show. Frontman Damian Abraham frequently jumps the barrier between fan and band, climbing the rafters and engaging even those farthest from the stage. The crowd was enthusiastic for openers Give and Speedy Ortiz, many arriving early to show their support for what OhMyRockness does for the entire NYC music scene.

The opening act, Give, plays an upbeat brand of DC hardcore with a soulful blend of rock and roll. Like Fugazi, this band glows with DIY attitude and positivity. Their stage presence was super lighthearted for such a heavy sounding band, ecstatic to be playing for such a large and supportive crowd. Songs like “I Am Love” had me comparing their vocals to Motörhead, but with a lot less gloss and speed.

If you’re into emotionally smart artsy punk, you may have already discovered Speedy Ortiz. Their sound is grungy and glamorous, drenched in fuzzy guitars and jangly vocals like Sonic Youth. “Hexxy” built up to an explosion, rough around the edges like an art school student’s anthem. Vocalist Sadie Dupuis once played in an all-female Pavement cover band called Babement, but her original songs are not to be missed. Thought provoking lyrics coupled with a stylish fuck-you attitude makes this band one to watch out for.

Bathed in yellow and blue light, Fucked Up descended upon the stage like an inter-continental tidal wave. Old favorites came out early in the set, like “David Comes To Life” and “I Hate Summer.” The latter speaks as a body-positive anthem, which the band dedicated to anyone who’s ever been made fun of for having tits (or for not having tits.) The dedications did not stop there, with the face-melting track, “Police“, being dedicated to any person who has dealt with a racist cop or a stop and frisk. To the venue staff’s dismay, the crowd began to get pretty out of control at this point. The band stopped momentarily to ask the crowd to chill out. They were clear in praising the bouncers, asking everyone to respect the fact that they have a job to do, and that no one is here to ruin a good time.

Soon after that, Damian left the stage and joined the crowd for a couple of songs, with a group effort being made across the entire venue to hold up his mic chord. New songs like “Led By Hand” were rowdy and fun, more experimental but just as hard-hitting as their older material. At one point, one member of the band brought his young daughter out on stage, sporting a giant pair of noise cancelling headphones. It was announced that he and his wife are expecting a second child soon, and the Fucked Up family would be gaining a new member.

The hardcore music scene can feel really small at times, but bands like Fucked Up remind me just how big it really is. Their ability to take risks is heartfelt, which keeps their fans interested in each direction they take. Check out their latest effort Glass Boys at The Matador Store and keep and eye out for them in Canada towards the end of September.