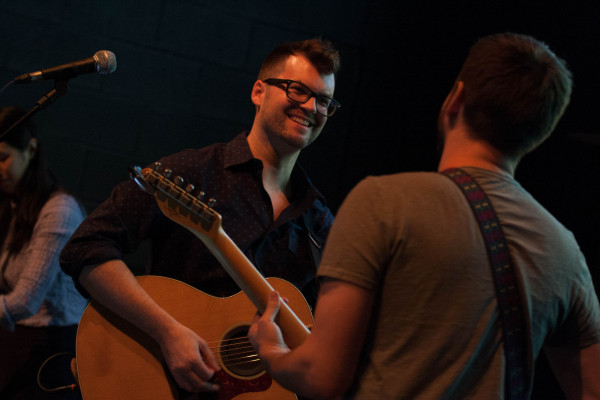 Faded Paper Figures have been one of my most cherished musical bands for a long time, with a warm and comforting sound in the sphere of electronica that can wrap around you like a blanket. However, with a series of demanding day jobs, tours are extremely rare from them. Being mostly based in Los Angeles, they’ve never played the East Coast. That is, until now. The group announced a quick tour in support of their fourth album, Relics. I road tripped over to Yale University to catch the opening night of it.

The whole feeling of the gig was centered around intimacy. FPF’s frontman, R. John Williams, is an assistant professor of English at the university, and to support the hometown feel, a small reception with cider and snacks was hosted. I felt privileged to partake in such cordial company. The specific venue was Nick Chapel, a sixty person room with steep stadium seating, styled like a black box.

The trio of Faded Paper Figures is rounded out by Kael and Heather Alden and joined live on drums by Kurt Deninger. Seeing the vocal harmonies of the group in person was what I took in with the most delight. They would play an hour long set with an even spread from all four of their albums. The performance concluded with a special surprise, the premiere of their first music video from Relics, “Breathing“.

Faded Paper Figures make their NYC debut tonight at Bowery Electric as part of the Tijuana Giftshop CMJ Showcase, and are on sharp at 8:55 PM. You can also catch them on the 25th in Provo, Utah and the 27th in Los Angeles.