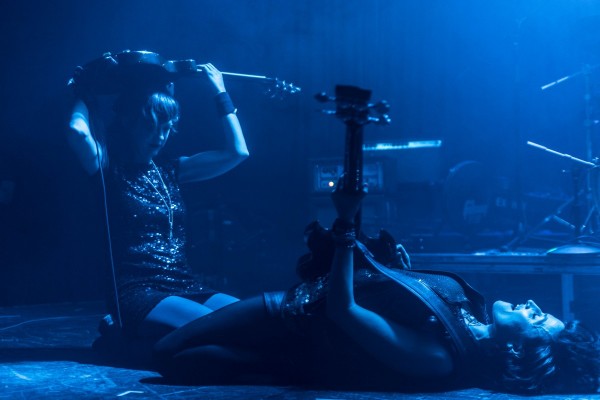 Rising DC trio Ex Hex headlined a dense bill at LPR. The four hour, four band marathon for the sold out show filled with people culminating in a packed house by night’s end. The strength of their last year debut, Rips, resonated throughout the audience. Mixed with a formidable and sultry rock and roll stage presence, we can have ourselves a dandy time. I’m a little late to the Ex Hex party, but now a true believer in the trio of Mary Timony, Laura Harris, & Betsy Wright.

The final opener was Sheer Mag, an authoritative Philly rock band leaning heavily towards the punk side. Two weeks back they released their second EP, II. You can see the video for its anthemic lead track “Fan the Flames” from it that showcases their devotion to the live side. They’ll be back May 9th supporting Pissed Jeans at Baby’s All Right.

Kuroma, Hank Sullivant’s rock project who I last saw years back supporting MGMT were stuffed in the middle of the bill, but a choice catch regardless. They had a strong, new album release earlier this month, Kuromarama, and this date was the penultimate of a string of NYC live shows. They’ll be back once more supporting Tennis next month, and following that tour they are joining Tame Impala on the West Coast, Jay Watson of the band did a remix of their lead track from Kuromarama, “20+Centuries.”

Roya, a newer formation of Brooklynite indie rockers warmed up for the evening. The band started last year as a trio with Rahil Jamilifard of Habibi singing, Hamish Kilgour of The Clean drumming, & Jay Heiselmann of Grooms slinging guitar. The band has now expanded to five with Christian Sawyer and Alix Brown, whose first show with the group was last night. They’re navigating towards a debut, and hearing good things tonight from them makes me optimistic for their future.